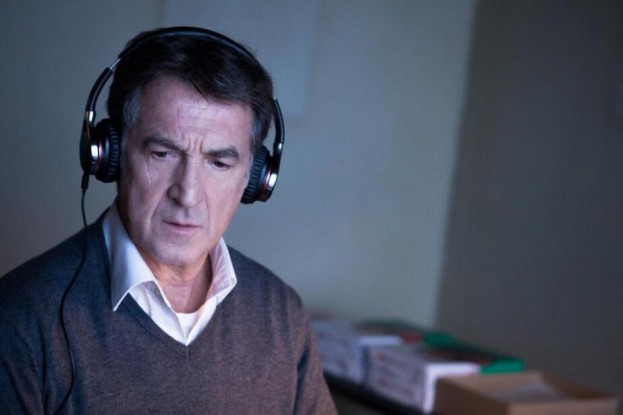 You can’t help admiring Thomas Kruithof’s feature debut. It’s a rather stolid but quality conspiracy thriller starring Francois Cluzet (Intouchables) as a number-crunching former alcoholic who is forced into the shadowy underworld of political phone-tapping, desperate for work after his marriage breaks down. Kruithof is clearly nostalgia for the classic style of Sydney Pollack’s films of the 1970s. SCRIBE also has echoes of The Accountant.

Although thematically rather slim, this slick and stylish affair is watchable largely due to Cluzet’s quiet charisma and a reliably subtle turn from Alba Ruhrwacher who plays Sara, a vulnerable woman also struggling with post-addition. The two become romantically involved while Cluzet descends into a world of intrigue at the hands of his dodgy boss Clement (Podalydes), a man of mysterious motives who clearly has him by the short and curlies in this criminally charged environment.

Written by Kruithof and Yann Gozlan – who also collaborated on another enjoyable retro piece A Perfect Man – this is a noirish thriller that keeps its smouldering cards close to its chest while delivering intermittant bursts of tension, although the narrative is driven forward by unsettling atmosphere rather than plot twists. Stark Gordon Willis-style photography and Gregoire Auger’s terrifically suspensful score sizzles along in the background while Duval goes through his bewildering job often overhearing things he shouldn’t be privy to, such as details of a murder and suggestions of Middle Eastern political undercurrents. Clement’s purported sidekick (Simon Abkarian) drags him into the murky waters of a criminal twilight but Duval keeps on going despite warning signs that he should quit before the going gets dangerous. And eventually it does. SCRIBE is a sure-footed but safe debut. MT

SCRIBE is in cinemas and on demand from 21st July 2017