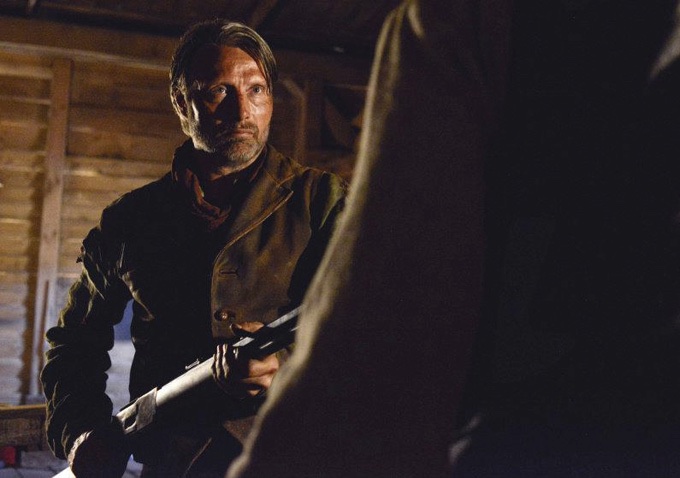 I first discovered this burnished beauty smouldering in the out-of-competition section last year at Cannes: It’s always gratifying to see a great film that hasn’t had any buzz, pre-festival, and THE SALVATION was one of those outings – but with Mads Mikkelsen and Eva Green what could possibly go wrong? Suffice to say, we’ve certainly found the next Clint Eastwood in Mads, who rocks a similar look in this Danish-styled Once Upon a Time in the West, from Dogma director, Kristian Levring. Mads plays Jon, a former soldier who immigrated to America after the Danish-German war in 1864. With his gung-ho swagger and just enough buttoned-up anger to keep the action taut and macho throughout. This glowering, sun-burnt saga also has echoes of High Noon, but was actually shot in South Africa by award-winning lenser Jens Schlosser.

When Jon’s wife and son are brutally killed on their arrival from Denmark; the modest, law-abiding outsider turns hurt into hatred, by taking the outlaw’s life in return, and in the process unleashed the fury of a notorious gang leader, Delarue (Jeffrey Dean Morgan), driving him to seek retribution. His own wife, Eva Green seethes in a stunning speechless part (as Princess), rendered mute by an Indian’s weapon. With a zippy running time of 92 minutes, this is a slick and enjoyable ride through the Wild West of the 1870s: The Danish angle works well with the xenophobic locals of that era, bringing a fresh new angle to the evergreen theme of transmigration. MT

ON RELEASE FROM 17 APRIL NATIONWIDE