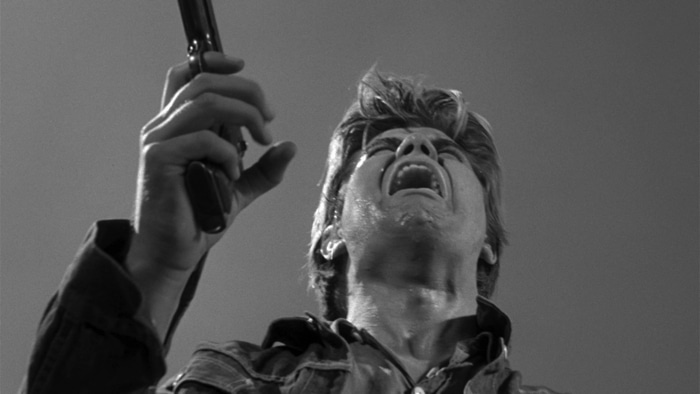 The ingenuity applied by Samuel Colt to developing his first revolver in 1835 is once again abused when one of its descendants finds a way into the clammy little mitts of grimacing psychotic Arch Hall Jr.; automatically transforming him into the person who gives orders instead of taking them. (Unlike dashing young Martin Sheen in Terrence Malick’s Badlands ten years later, sneering, monobrowed Hall actually resembles the original spree killer Carl Starkweather upon whom both films are loosely based).

An innocent trip to Los Angeles for a Dodgers Game ends in a terrifying nightmare for three naive teachers who encountering car trouble, pull into an old wrecking yard where they are held at bay by a bloodthirsty psycho and his girl friend. The lunatic is none other than Hall’s Charlie Tibbs, (loosely based on serial killer Charles Starkweather), and his girlfriend Judy (Manning). Accompanied by a seething score the ensuing ordeal is a slow-burn trip to Hell that is slim on plot but fraught with atmosphere and nuanced performances – particularly from Hall – his goofy appearance adding a twist of dissonance to the unfolding terror.

Following in a long tradition that dates back at least as far as the hostage-taking drama The Petrified Forest, this nihilistic little exploitation film made in black & white for just $33,000 in two weeks, was ironically the first American feature film shot by Hungarian-born cameraman Vilmos Zsigmond (billed as ‘William’) who was later behind the camera in Deliverance, with which it has more in common than Malick’s dream-like fantasy. Richard Chatten.