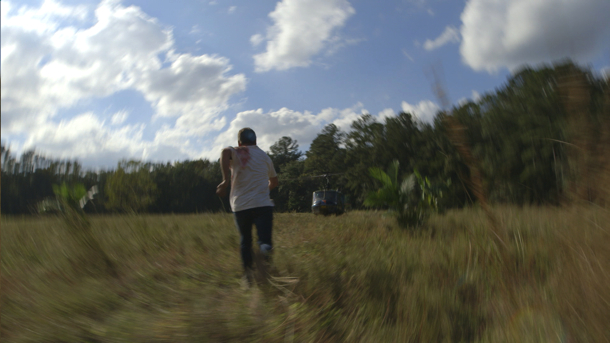 The Sacrament came into being when the ‘found-footage’ era was in full swing with its bid to import serious thrills to contemporary audiences, that started with The Blair Witch Project. Ti West’s thriller certainly succeeds in purveying an ambience of genuine and sustained terror, but since then the genre has increasingly required the kind of suspension of disbelief akin to that of the second coming of Jesus.

Back in the day my belief was suspended – not out of shock or horror – but out of genuine incredulity that an audience would find this sort of nonsense believable, in any shape or form. The mere fact that the footage is ‘found’ intact and undamaged surely means that the collaborators are alive and well and enjoying the fruits of their labours so, by its very nature, this presents a foregone conclusion to the intelligent art house cinema-goer.

In The Sacrament three New York documentary makers become embroiled when they explore a ‘Moonie’ style ‘religious’ commune where the egregious presence of Father (Gene Jones) holds omnipotent sway over the proceedings. But the problem here is that West’s signature slow-burning narrative skills start to wear thin once its dawns that this is just another cliché-ridden swamp of ‘what-ifs’, albeit one filmed in the remote and atmospheric reaches of sweltering Savannah, Georgia by an excellent ensemble cast. MT

THE SACRAMENT IS ON PRIME VIDEO