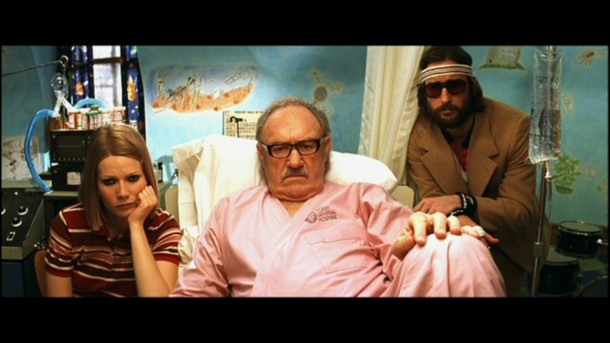 Wes Anderson offers us another delightfully eccentric comedy this time about a wealthy family of Jewish geniuses who single-mindedly peddle their own canoes while hanging together in a sprawling and dysfunctional dystopia. They hating each other but at the same time are viscerally connected. Snappily narrated by Alex Baldwin to a score that opens with the Beatles and includes snatches from Simon & Garfunkel, the film enjoys a solid gold cast playing uniquely unappealing characters headed by pater-familias Royal Tenenbaum (Gene Hackman), a disbarred lawyer who spends an unfeasible time away while still asserts his authority. This florid and stylised affair takes places loosely in ‘chapters’.

One day Royal returns home, unable to pay his bills in the hotel suite that has been his temporary hiding place, with the story that he is terminally ill and wants his family under one roof again for the first time in 17 years: “I’ve always been an asshole, that’s just my style”. His wife Etheline (Angelica Huston) tells him to “stop following her” then breaks down in tears. The three children: Gwyneth Paltrow is Margot, a playwriting prodigy who was adopted; Luke Wilson plays Richie, a failing tennis pro who is in love with Margot; and Ben Stiller as Chas, a recently widowed financially savvy property developer who has previously sued his father twice and holds him in contempt, despite his tragic news. They are joined by Chas’ two kids (in tracksuits looking like something out of Cronenberg’s The Brood) and close family friend and best-selling novelist Eli (played by co-scripter Owen Wilson). But Royal is adamant in wanting a rapprochement and soon finds himself in Richie’s mice-ridden bedroom complete with drips and hospital medication.

What then ensues is a hypochondriac chambre piece (that actually takes place partly on the roof) where squabbling and sniping are the order of the day whereby a genial Royal attempts to ingratiate himself back into the bitching bosom of his family. But it soon transpires that his illness is faked and he leaves in a humiliating climbdown, one snowy New York day, spending the rest of the film as a bell boy.

Bill Murray appears in a comedy cameo as a psychologist and there is a deliciously dark and deadpan humour in all the characters’ often inappropriate exchanges. Naturally Gene Hackman is the standout with all the best lines: When Royal is told of Etheline’s close relationship with her financial advisor (Danny Glover), he responds “she may have had her share of infidelities but she’s still my wife, and no two bit chartered accountant is gonna change that”. He later puts him down scathingly with the greeting “Hey Pops, what’s cooking?” Eventually when the two get married he introduces himself to the Vicar as being “Half-Hebrew, and the children are a quarter Catholic”. Highly entertaining. MT