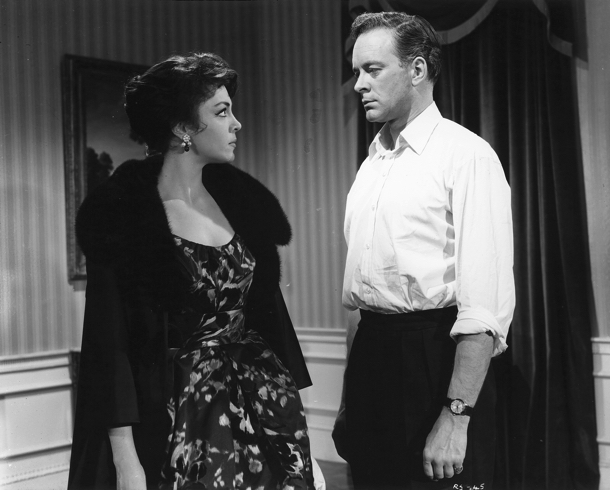 In 1959 Siodmak worked in the Elstree-Borehamwood studios, to direct THE ROUGH AND THE SMOOTH, based on the novel by Robin Maugham. Robert Cecil Romer, 2nd Viscount Maugham, nephew of Somerset Maugham, was the enfant terrible of his family. Socialist and self-confessed homosexual, he was a very underrated novelist: “The Servant”, filmed in 1963 by Joseph Loosey, with Dirk Bogarde in the title role, is one of the classic’s of British post-WWII cinema. THE ROUGH AND THE SMOOTH shows similarities: Mike Thompson (Tony Britton), an archeologist, is engaged to Margaret (Natasha Parry), the daughter of his boss, who finances his work. Mike feels trapped in a loveless relationship, and falls for Ila Hansen (Nadja Tiller), a young and attractive woman. But she has a secret: not only is she in cahoots with the tough gangster Reg Barker (William Bendix), but there is a third man in her life, who has a hold over her. After Barker commits suicide, driven by Hansen’s demands, the latter tries also to blackmail Mike and Margaret. The ending is quiet original. There are very dark undertones, particularly for the late 50s, when Ila comments: “I don’t cry much, I have been hurt a lot”. THE ROUGH AND THE SMOOTH is a subversive film considering the context of its period. The camera pans over stultified Britain of the last 50s, where there seems to be no middle-ground between boring respectability and outright perversion. When the two worlds collide, the conflict is fought on both sides with grim, violent determination. With THE ROUGH AND THE SMOOTH, Siodmak, would, for the last time, come close to his American Noir films, for which he was called “Prince of the Shadows”: referring not only to the quality of the images, but also to a society, where, to quote Brecht, “we are only aware of the ones in the light, the ones in the shadow, we don’t see”. Robert Siodmak made sure, that the ones in the shadows played the major roles in his Films Noir. Andre Simonoviescz ©