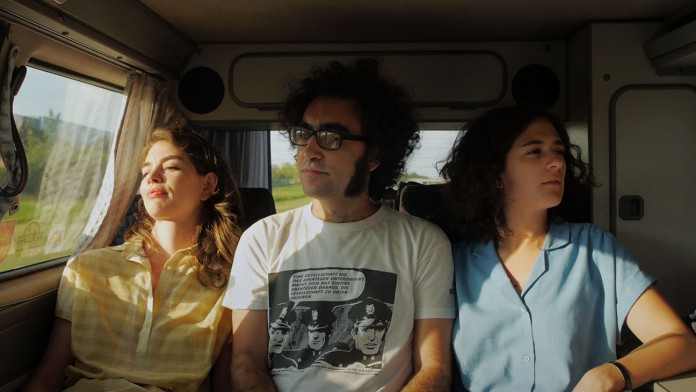 Three Spanish guys embark on a trip to Paris in a camper van, just for the hell of it in this sunny arthouse gem. THE ROMANTIC EXILES is Jonas Trueba’s follow-up to his stylish The Wishful Thinkers that garnered awards in Malaga and the US.

Luis, Francesco and Vito are romantic dreamers who like nothing better than a good philosophical chin-wag about love and the meaning of life, over a few bottles of wine, in a Parisian courtyard somewhere off the Boulevard St Germain.

Loose and laid back, this is low-budget filmaking at its best. Trueba throws in Tulsa’s music to liven things up and the dialogue and acting is fresh and genuinely amusing as the trio amble through this leisurely journey, often meeting up with others to add flavour and spice to their witty, wise and often whimsical wine-fuelled dinners – like the one where one friend annouces her impending motherhood without a baby or father in sight. Sixties theatre founder, Jim Haynes, puts in an appearance, just for good measure.

Vito (Vito Sanz) is the driver and the most low-key of the trio, Vahina (Vahina Giocante) is his spirited girlfriend. Francesco (Francesco Carril) speaks fluent Italian most of the time with his friend Renata (Renata Antonante); Luis (Luis E. Pares), a film buff, would like to get back with his (girl) friend Isabelle (Isabelle Stoffel, who also appears in The Wishful Thinkers).

Pointless but often poignant: the tone here is light-hearted but the themes serious: work, friendship, the end of youth, adult responsibilities, and women having the upper hand. Colours are acid bright: rich coral, turquoise and emerald fizzles with vibrant April freshness. Several romance languages are spoken making it all feel very Mediterranean  – French, Italian, Spanish. References to 21st century art and literature make up a bohemian brew with a distinct feel of Eric Rohmer to it: you almost expect Louis Garrel to saunter onto the set complete with beret, and baguette under his arm. And at 70 minutes Trueba can get away with a lack of real narrative, as the discussions carry a certain charismatic enjoyment punctuated by trips in the van and the tuneful  score that is always major in key. MT