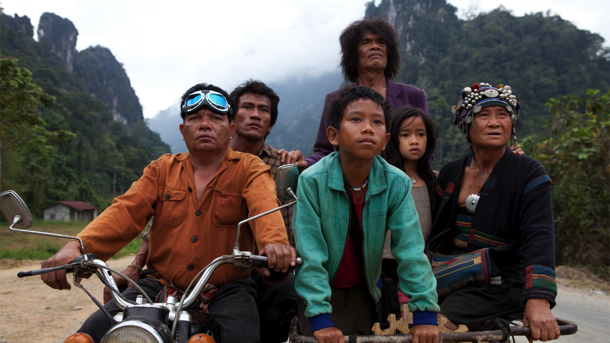 Laos: Ahlo was born a twin, his sibling died at birth. According to the Animist religion this can bring bad luck for the family. Ten years on and the prediction appears to have some truth to it: The family has to move to make way for a big dam and Ahlo’s village is one of many which will be flooded by the Australian company responsible. Ahlo insists on taking a boat to Paradise, a new housing settlement that is anything but.  But it is this boat which causes an accident, killing his mother Mali. For Taitok this is proof enough that Ahlo is indeed the “evil one”. Ahlo makes friends with the orphan Kia, a very headstrong and enterprising nine-year-old. She lives with her uncle “Purple”, a member of the Hmong tribe, who was enticed by the CIA to fight for the Americans in the Vietnam War. More tragedy ensues. The only hope is  on the horizon is the ‘Rocket’ festival: a dangerous venture that rewards the builder of the highest flying rocket (causing the long awaited rain to start) free land and housing. ‘Purple’, who is drinking himself to death, advises Ahlo to build a magic rocket.

THE ROCKET is  Mordaunt’s first feature, but he has shot numerous documentaries, among them Bomb  Harvest (2008), a film about Australian bomb disposal specialists, clearing Laos from the unexploded American bombs, still littering the country; together with cluster bombs, designed to look like fruit. Children, who sell both types of bomb as scrap metal, are often the victims of a war that was over nearly forty years ago. Ahlo and Kia have two narrow escapes, the ground is still  littered with these deadly weapons. ‘Purple’ is still living in the past, still adoring US culture, modelling himself on James Brown. Foreign engagement past and present meet in THE ROCKET: The socialist government is opening the country up to foreign investors, but so far it has created too many displaced people, who have had to leave their villages and end up, like Ahlo and his family, in refugee camps. Traditional life has suffered and although the Loatians are a resilient people, they are ill prepared for survival in the 21st century.

Mordaunt’s camera work is exceptional: long panning shots and panoramic views of the beautiful landscape entrance the viewer, without suffocating the content. The acting is superb, even (or because) the two lead actors are newcomers bringing a fresh enthusiasm to the drama. THE ROCKET is moving, but never sentimental,  keen like a debut film should be, but never over-emphasising the point. But the greatest strength is its faithful documentation of everyday life, showing care in even the smallest details. AS

THE ROCKET is on general release from 14th courtesy of EUREKA ENTERTAINMENT.