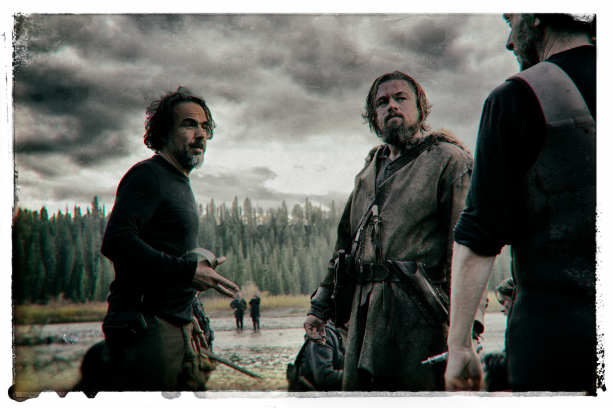 Mighty and mystical THE REVENANT is a harrowing tale of revenge and survival that touches on the emerging arrogance of the early 19th frontiersmen towards the local Native American tribes they discover as they pushed westward. Magically poetic and brutally savage it travels beyond the realms of mainstream American filmmaking with every frame evoking the mystery of the ancient with the mastery of modern visual techniques. Director Alejandro G. Iñárritu and his DoP Emmanuel Lubezki have created a glorious and visceral portrait of man’s struggle to survive in the wilderness and his obduracy in overcoming the natural world. Leonardo DiCaprio carries the film in a performance infused with his charismatic strength and vulnerability. The other great performance is from Nature itself.

Iñárritu and his team inhabit the open space for most of the film’s 156 minutes’ running time, during which both ethereal silence and feral sound is a key player. Ryuichi Sakamoto’s atmospheric score occasionally  adds an ominous twist here and there as the Lubezki’s camera slinks around at a snail’s pace uniting man, nature and beast in one magnificent revolving universe and savouring melting ice peaks; iridescent sunsets; floating mists: prowling paws; even the breath of its striving hero as its clouds the intimate lens: this is a film to savour for its moments of peace; its echoes of the wild and its pitiless ferocity. The director showcases nature as its most hostile and majestic: at one point a rifle shot actually triggers a distant avalanche: Kubrick and Konchalovskiy would be proud.

Set in 1823 in the Rocky Mountains, twenty years after the first expedition to America’s unknown western portion had been sent by Jefferson (to draw up a new map of the territory and establish trade with the local Native American tribes) Iñárritu and Smith’s script is based on real people, as well as loosely on those from Punke’s 2002 novel, which charted Glass’s gruelling, monosyllabic journey more precisely.

The story opens as a local Pawnee tribe is savagely routed by a group of white fur trappers. Iñárritu refreshingly uses arrow warfare as a swift and deadly savage twist on the usual ‘smoking guns and war hammers’ mode. Hugh Glass (DiCaprio) is a frontiersman travelling with his son Hawk (Forrest Goodluck) and Captain Andrew Henry (Domhnall Gleeson), and valued because he has had the benefit of Pawnee culture (through his dead wife whose spirit we see in regular existential and dream sequences as she encourages him to “keep breathing”) and is equipped with a grasp of the lingo, customs and lay of the land.

But the drubbing severely curtails their fur trading mission and with winter’s arrival and their strength and supply of pelts sapped, misfortune continues to dog the party: Glass has the misfortune to be mauled by a recalcitrant mother grizzly bear (an extraordinary piece of ultra-realism) while taking a pot shot at one of her cubs, in a scene that is both shocking and faintly humorous. Despite Captain Henry’s doctoring attempts, Glass’s wounds prevent him from walking and, with Henry going on ahead, he has to be carried by a cantankerous John Fitzgerald (Tom Hardy) and a pubescent Jim Bridger (Will Poulter) who abandon him to die, half buried in a shallow grave. Glass’ struggle to survive takes over the coruscatingly eventful second act and this is where DiCaprio emerges an action hero harnessing his precious knowledge of the terroir to scavenge, scrape and scrounge his way across the wilderness.

As Fitzgerald, Tom Hardy is the weakest link in the cast in performance that’s almost outstanding in its tawdriness compared to his previous offerings. Spouting incoherent, bumbling gibberish in a non-descript accent from under his headscarf, he fails to alarm or even excite as the antihero, dragging down every scene he inhabits. As Glass makes his way to the fort, Fitzgerald’s duplicity emerges, forcing him to de-camp for a second time, Glass in hot and heavy pursuit: “I ain’t afraid to die anymore. I’d done it already”.

You might be forgiven for thinking that Alfonso Cuaron’s hand is involved in THE REVENANT. There’s the same doggedness about the human struggle and the same mystical, ethereal quality that elevates the action/adventure premise to some more meaningful; although Iñárritu’s piece lacks the whiff of humour that lightened Gravity – forgive the pun. Gleeson is both honest and appealing as the Captain, adding a faint air of charm and gentility to the proceedings.

Locations-wise we’re transported to Canada and finally remote snowy regions of Argentina, where the final scene takes place in untouched snow and using the chilling sombreness of natural light, thanks to Lubezki’s short lens wizardry. THE REVENANT is a film that stimulates all the senses: watch, look, listen, feel and be awed. MT