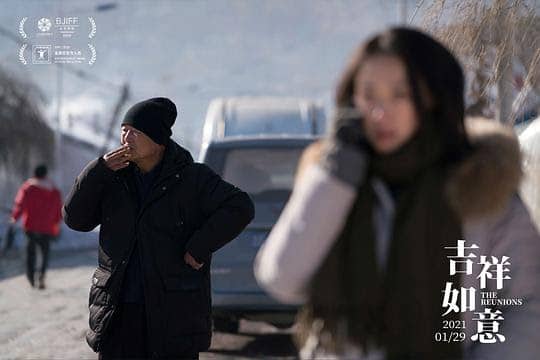 Chinese writer/director Dong Chengpeng had great success with his comedy City of Rock. But The Reunions is a different beast altogether. Actually, it’s two films in one, conflating the 40-minute doc-drama A Reunion (2018), whose cinema premiere we witness, with a second part, A Final Reunion, exploring contradictions of modern China: the price of success, the chasm between big cities and the countryside and the loosening of traditional family ties. Its languid mood is full of resignation and regret.

The director’s first foray into arthouse territory was inspired on a trip back to his rural hometown of Tonghua, where the family New Year get together will celebrate his ailing grandmother, who has held to the family together. But she died during the shooting, leaving Chengpeng’s original script in tatters. So the real drama unfolding is not the death, but the problem of what to do with Uncle Wang Jixang, a man in his early sixties who has suffered brain damage leaving him with the mental age of a baby, his vocabulary reduced to mumbling the names of his relatives, but leaving out his own.

Structured a little bit like Michael Frayn’s play ‘Noises Off’, we see both sides of the enfolding drama: the docu-drama elements are set against the filmmaking itself, as crew and cast come together as Chengpeng’s intentions are put to the test.

Throughout the film a musical motif glorifies the Chinese Communist Party and its Chairman Mao. Wang had been a high ranking Security official before his illness, and helped many of his relatives to settle in the city, no mean feat. Among those is his thirty-something daughter Lili (Liu Lu), who sided with her mother and benefited from a financial settlement when the family was divided. Lili has a young child and is unable to look after her father, who needs constant care.

Reality and script collide in a pause during filmmaking when Lili asks one of the relatives why ‘she’ had stayed away for ten years from the family: instead of an answer, there is silence – with her real life counterpart looking on. All the feuding family can agree on is that the making of the film had motivated them to attend the gathering – which may well be the last.

Dong Chengpeng serves as his own DoP along with Wang Quinyl to capture the generalised feeling of sadness as well as the colourful New Year’s celebrations with the its impressive fireworks. The director is clearly moved by his own remorse: this long goodbye to the village where he grew up and the slow erosion of the family have finally taken their toll. @AS