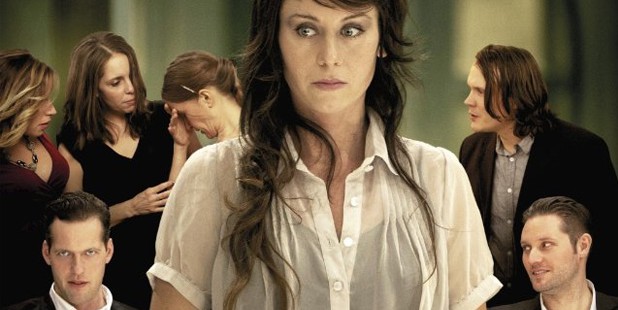 Artist, director, writer, exhibitionist: Anna Odell is many things. In 2009 she caused a furore in her native Sweden with a university graduation-project entitled “Unknown Woman 2009-349701” that involved her staging a fake suicide attempt and was taken away by men in white coats before admitting that the whole thing was actually a stunt in the name of Art. Any publicity is good publicity, and despite a court case that ensued, she became a household name.

In her debut feature, she plays herself in a striking lead in a psychological drama exploring the dynamics of power and bullying within a group of friends. During a college reunion 20 years after graduation, Odell examines how individuals ostracised in the classroom can go on to suffer mental issues later on in life.

Anna has found her way into filmmaking via her conceptual art projects which have proved controversial in her native Sweden, but found little interest abroad. This disappointingly tepid outing sees her acting out this new provocative persona on the big screen. School reunions are the unavoidable consequence of social media, which has made sure that no one can successfully disappear into oblivion from the schoolfriends they never even liked in the first place. Odell’s drama opens with a really disastrous example of how these gatherings can descend into farce or even tragedy. With shades of Thomas Vinterber’g Festen (The Celebration), this gruesome gathering of forty somethings rapidly goes awry when perpetual outsider Anna’s  ‘goes off on one” unleashing a torrent of accusatorial abuse.

Odell’s drama takes on a film-within-a-film structure: in a demoralising showdown she is forced out of the premises after the initial ugly mêlée Part One: The Speech and in a considerably calmer version of herself follows (Part Two: The Meetings) undergoes further demoralisation as she shows her work to the people on whom her protags are based, in a disingenuous attempt to garner respect that results in further alienation from her peers.

What emerges is a fictional film about the making of a fictional art exhibition but fails to really excite the audience or attract sympathy for her work: it actually elicits embarrassment rather than shock. And as another film blowing the lid off Scandinavia’s outwardly prim and ‘sorted’ society, it pales in comparison with Winterberg’s Danish dogma piece, and feels attention-seeking than entertaining, Nor does it shed any new light on the situation despite solid performances and slick crafting. MT