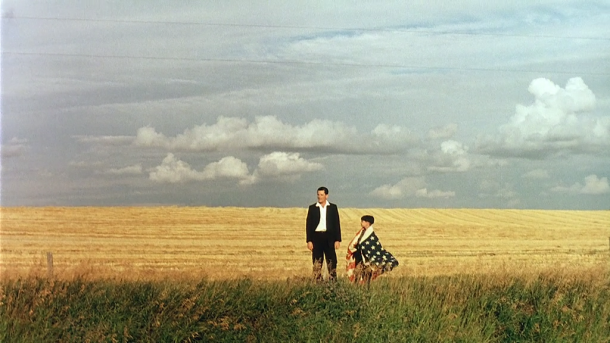 The Reflecting Skin is seasoned theatre director and novelist Philip Ridley’s feature debut. Unfolding with a blinding clarity of an advert for Kellogg’s Cornflakes. The hyper realist brashness of its copper-coloured cornfields and royal blue skies provide an unlikely backdrop to what is essentially a child’s nightmare rite of passage in fifties rural Idaho. The child is Seth and he’s barely nine years old.

This is American Gothic at its most doom-laden and bible-bashing. A burnished baptism of fire both for its protagonist and its viewers. By cherry-picking from the likes of David Lynch and Terrence Malick, and casting some worthwhile actors (a young Mortensen and Duncan) Ridley hopes to cobble together a decent  film. But he forgets about the script and characterisation and lacks the directorial experience. Stringing together a range of poorly thought melodramatic cyphers: a depressed father (Duncan Fraser) who self-immolates, an abusive unloving mother (Ruth Dove), an aimless widow (Lindsay Duncan) and a sheriff (Robert Koons looking as if he’s lost his way back to the set of a Tarantino movie) and, to cap it all, a carload of text book amateur paedophiles suddenly their hands to adult murder in the closing moments. he delivers an quasi operative experience that is both bafflingly inept and unsatisfyingly unengaging. With The Reflecting Skin he evokes a meaningless world that uncovers nothing and fails to move or entertain us in the process.

The banality of evil is David Lynch’s stock in trade but he also knows how to direct a film and create a false sense of reality where things are rarely what they appear to be. His masterful direction and sense of timing and aesthetics are flawless in Blue Velvet and Twin Peaks.  In The Reflecting Skin everything is out in the open: no mystery or magic, no sense of dramatic tension. It is a drama without drama, a horror outing without terror, a ‘fantasy’ that possesses nothing dreamlike for the subconscious.

As Seth Jeremy Cooper is a one dimensional character whose only emotion spills out in the final scene; probably with relief that it’s all finally over. Seth witnesses events that are horrible and bizarre not only from a child’s point of view but also to most adults. Lindsay Duncan is hopelessly miscast as the widow, although she does her best with an underwritten character who lives in a Barrett’s show home on the prairie. An embarrassingly awful love scene with Viggo Mortensen’s young soldier (Seth’s older brother) is singularly un-sensual and meaningless as the pair have no chemistry or romantic arc. Animal cruel aside: The exploding frog scene is sad rather than horrific and the female twins who drift by occasionally with a wounded bird feel out of place and non-sensical but are the film’s only horrific experience. A drop in the ocean of this weirdly irritating fantasy horror that thankfully has a brief running time of 96 minutes. Still that’s 96 minutes you could have been watching something worthwhile.THE REFLECTING SKIN is the perfect film to illustrate just how difficult it is to make a good film. MT