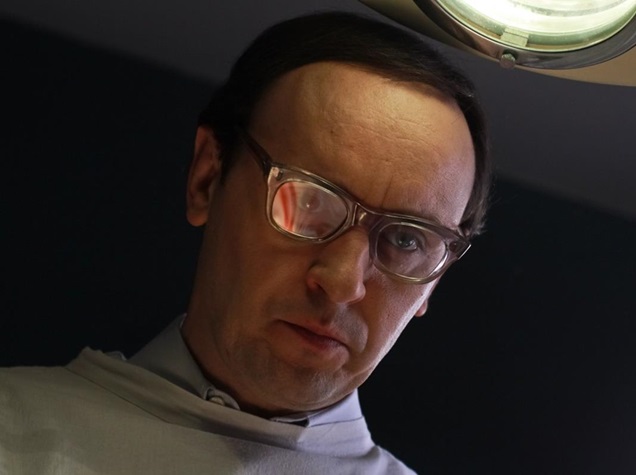 With a quiver of macabre shorts and documentaries under his belt, Krakow-born filmmaker Marcin Koszalka is one of contemporary Poland’s most interesting talents and gathers around him an award-winning design crew.. Inspired by real events, his first fiction feature is a stylishly pristine and cryptic affair that delivers its sinuous storyline in a tightly-paced 90 minutes.

There are sinister things going on in communist Krakow in 1967. In a snowbound park, champion diver, medical student and dutiful son Karol Kremer discovers the multilated body of a teenage boy on his way home. In the shadows, lurks a man in a beret and Karol follows him home to discover he is the local vet, Lutek. The nightly news announces the 11th victim of a serial killer, a young boy. But Karol (Filip Plawiak) is hardly a straightforward chap himself and clearly a fantasist who becomes obsessed with the murders, visiting Lutek (Adam Woronowicz) with his ailing pet terrier (who he has pre-poisoned), and cross-examining him over the murders, which the vet doesn’t deny. Meanwhile, Karol is also conducting a slow-burning seduction of female photographer Danka who soon becomes the killer’s next victim in a frenzied hammer attack. Kremer is arrested as the prime suspect and bizarrely goes along with police inquiries, relishing the opportunity of becoming the centre of attention yet oblivious to the consequences.

More than just a film about serial killing, THE RED SPIDER is very much an evocative mood piece echoing unsettling political events of the time of widespread student protests with the government in disarray in the run-up to the Prague Spring in neighbouring Czechoslovakia. Koszalka’s immaculate camerawork echoes the chilly climate of sexual repression and uncertainty of the strictly Catholic country. Magdalena Dipont’s sets evoke the sleek minimalism of Sixties design in the interiors and street scenes. Although much of the narrative remains fairly enigmatic, Koszalka constructs a spider web of plausibilities that are not beyond reasonable doubt, and the froideur of perfectly-pitched performances adds allure to this his frigid thriller. MT