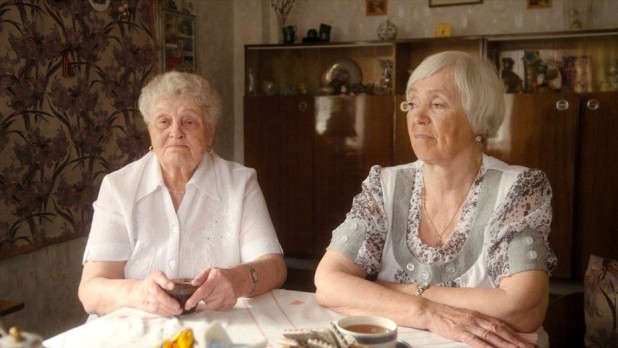 Nearly 65 years after the death of Joseph Stalin, director/co-writer Jessica Gorter (900 Days) asks citizen of the Russian Federation the question if Stalin was a tyrant or a saviour. The response is illuminating, sad and relevant.

Current polls put Stalin and Putin on top of the popularity pole in the Russian Federation: the former is mostly defended by older people, who see the Stalin era as the highlight of Russian world dominance. Even when confronted with the legacy of the Camps, an old woman literally spits at the interviewer: “When two men in our factory came back from the camps, they were strong like bulls. Look at today’s youth – they are weak and pale”.

Overall the majority still sees Stalin as a creator of strength and stability. Even the father of a young man who died after his meth-lab caught fire, blames the lack of discipline under the post-communist regime for the death of his son. He is joined by many who equate Stalinism with a time without drugs, prostitution and harsh but just sentences for criminals.

The ones who who mourn the victims of the Great Terror, tell harrowing stories: An order from Moscow KGB asked the authorities in Leningrad, at the height of the Great Terror in the late 1930s, to shoot six hundreds people. The proud answer was quickly delivered to the Moscow HQ of the security services: the quota was doubled, and 1200 citizens met their death. Today, the supporters of the Stalinist terror bemoan the existence of bank accounts, which were not needed in those days. Stalin, so one of his defenders, “was unselfish and wanted nothing for himself.”

People who are trying to keep count of the forgotten names of the million of victims get very little assistance from the current government. And those who try to identity the corpses in the mass graves like in Severodvinsk, make very little progress: in 23 years of digging around in the mass graves of 20000, only 83 bodies have been identified. Two elderly women are standing near a street in the city of Severodvinsk, which was built by prisoners. They show the filmmakers the exact place where they watched their mother in the long columns of inmates, who where marching to work. School children in the same city talk today about their parents and grandparents who are either proud of the achievements of Stalinism, or bemoan the dead members of their families who died in the camps.

Two sisters in St, Petersburg talk about how their parents were denounced by a family member to the KGB and arrested. Their father did not survive, but when their mother returned to the family ten years later, she blamed nobody: it was simply the way of life. And the sisters have internalised this: they are very worried about “having slandered Russia with the story of their parents. We don’t want it to come back to us like a boomerang. It is, after all, our country”. The major consensus for the young historians, gathered in the Crimea, is “that we cannot judge this era. Pride and Pain are equal”.

Gorter and DoP Sander Snoep excel in showing the harrowing images of the mass graves, and the sites of the old camps. It will never be known how many Russians, among them many ’believing’ communists, have died during Stalin’s terror. The fact that even at the beginning of the 1960, fifty-three Camps existed in the old USSR, is proof of the vast number of victims. But today, Stalin and his system is still defended by too many – supported by a government which is more interested in creating a new Russian Nationalism than defending the victims of the past – or the fledging democracy of the present. AS