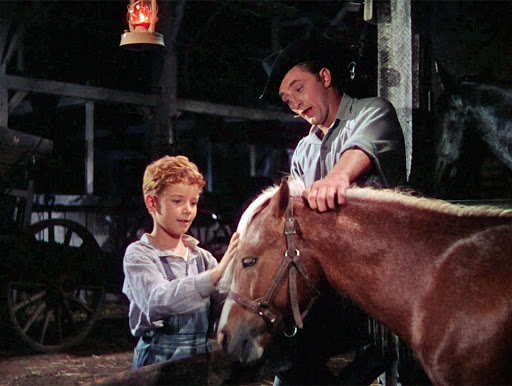 Ten years after his classic version of Of Mice and Men for Hal Roach, Lewis Milestone this time went to Republic (the title design is the same as on their John Ford westerns) to again film John Steinbeck (this time adapted by Steinbeck himself), who professed himself satisfied with the results.

In addition to Steinbeck & Milestone this stagy but affecting little fable recalling The Yearling and The Boy with Green Hair marshals various disparate talents including composer Aaron Copland (who had also scored Of Mice and Men) and veteran cameraman Tony Gaudio doing a lovely job behind the camera on his final film; while Bob Mitchum is in his only Technicolor film of the 1940s and Myrna Loy of course looks ravishing in her first since the two-colour days and coming as close as she ever came to her long-cherished desire to play a frontierswoman.

The brash little blond kid with blue eyes is a seven year-old Beau Bridges, Louis Calhern as Loy’s garrulous pappy looks and sounds almost exactly as he did the following year as Buffalo Bill in Annie Get Your Gun; while Margaret Hamilton as the local schoolmarm appropriately looks as if she just stepped out of a painting by Grant Wood. @Richard Chatten