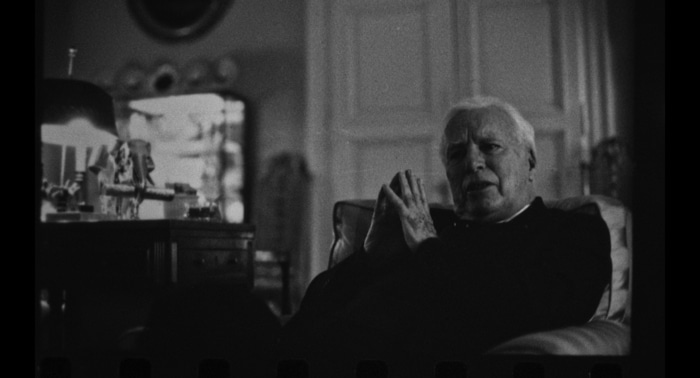 Writers/directors Peter Middleton and James Spinney (Notes on Blindness) have tried with co-writer Oliver Kindeberg to explain the dualism between Chaplin’s professional and personal identity without the use of “talking heads”. A great idea but a flawed one – as it turns out – what we get instead is Pearl Mackie’s incoherent narration (Pearl Mackie) that takes the form of a “flow of consciousness” over-didactic commentary, without any inner artistic logic. The directors have also taken on more than they can chew. How do you do justice to an icon like Chaplin in under two hours? – his life deserves a mini-series. Middleton and Spinney do their best but the time factor makes mistakes unavoidable.

It begins in 1916, the first height of Chaplinmania. Across the US a hunt for the real Chaplin is on, whilst Chaplin-look-alike contests are very popular. The idol itself, Charles Spencer Chaplin was born in London in 1889, his drunken father soon made a runner, and Charlie had to witness his mother succumb to mental illness. The room in Kennington was re-created later in The Kid. A female voice tells us that the woman – played by an actor in one of many re-enactments -, is Effie Wisdom, who in an interview in 1983 – she was 92 years old at the time – talks about the late 19th century, when she used to play with Chaplin in the alleys, the latter promising to never forget her.

Chaplin joined Fred Karno’s comedy troupe, who later toured the US. Chaplin was a man of the Vaudeville theatre and considered film work beneath his aspirations – until the producers trebled his salary. In a 1966 “Life Magazine” interview he explains the haphazard creation of the ‘Tramp’ personality in February 1914: discarded costume parts of his own, the boots of a college and Fatty Arbuckle’s pants. But behind the camera Chaplin left nothing to chance. In City Lights he drove everyone mad with a 534 days long chase for the perfect pivotal take. Extended clips from The Kid, Gold Rush and Modern Times lead to The Great Dictator, when Charlie finally talks. Chaplin’s sad 1952 expulsion from the USA, J Edgar Hoover and Hedda Hopper combining, is not given enough space, the documentary comes to life again in the Swiss exile, with interviews with the children Chaplin sired with Oona O’Neill, who was seventeen when she met the 52-year old – a rather common age gap for Chaplin’s relationships with women. Jane and Geraldine speak of the loneliness their mother must have suffered, because their father was cool and distant. “I imagine it would be lonely being the wife of Charlie Chaplin”.

All the so-called revelations about Chaplin’s personal life were known during his life time, leaving the re-enactments of his work as director/writer/composer/editor as the most enjoyable elements. Paul Ryan is Chaplin age 58, Jeff Rawle portraits the 77-year old maestro. DoP James Blann finds just the right aesthetic for the dramatisations, whilst composer Robert Honstein’s aggressive score underlines the directors’ gutsy approach for a “kaleidoscopic documentary collage”, which is another way of admitting to a lack of structure. Still, there is so much archive material, new and old, that everyone will find something to enjoy. AS

ON RELEASE IN UK and IRELAND FROM FRIDAY, 18 FEBRUARY 2022