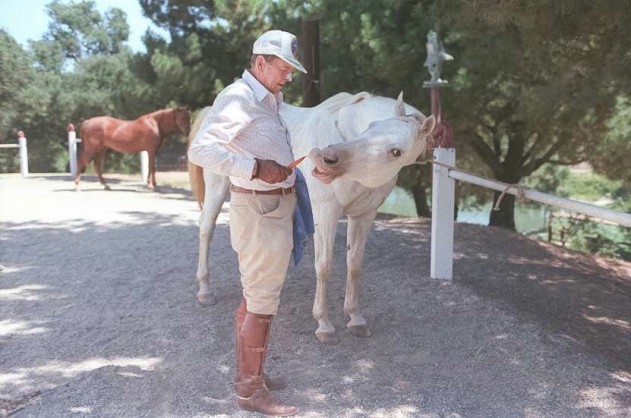 Pettengill and Velez’ entertaining documentary captures the pageantry, absurdity and mastery of the made-for-TV politics of Ronald Reagan (1911-2004) entirely through White House footage and archive news reports. And although the directors brings nothing especially new to the party that covered the Reagan Administration  from 1980-1988), with Donald Trump’s arrival in the White House, even the Reagan presidency needs to be re-evaluated.

Asked in 1980, why Ronald Reagan was elected president of the USA, a journalist friend of mine ventured his opinion: “The powers that are, wanted to give the job to somebody who read the cue-cards the best”. He was referring to Reagan’s acting career; though mostly spent in B-pictures, Reagan was a household name, and his portraits of the average, good-natured American (in the majority of his features), made him an ideal figure to identify with. Even if the truth about him – working as an informer for the FBI – would have been leaked, it would not have made any difference at the polls. Reagan himself was much more self-aware than one assumes. Asked by a TV interviewer if it helped to have been an actor before becoming president, he answered; “I don’t know how I would have done the job, if I had not been an actor.”

Yes, he had trouble spelling names, like the one of New Hampshire governor John Sununu, whose election he sponsored: the recorded interview had to be interrupted many a times, before Reagan got it right –but hey, George W. Bush could hardly string a complete sentence together. And even if Reagan’s appearance before the TV cameras with a saw in his hand, representing his fight for a meaner budget, was truly cringe-worthy, it seems more funny than malicious today. Anyhow, ‘staging the message’ was/is always part and parcel of the ‘White House Show’ – until Trump decided to break all the rules. The reason we have so much material on the Reagan years, is, that his administration recorded more events, than the five before combined.

Reagan was a cold-war warrior, and even after only one year in office, public opinion showed that the US population was more afraid of an all-out nuclear war with the USSR than 12 months before; further more, the majority of the US population thought that nuclear war with the USSR was inevitable. The president was in/famous for two of his statements: one was his support of the Strategic Defence Initiave (also known as ‘Star Wars’), the other one naming the USSR “as an evil empire”. But being the master communicator he was, Reagan turned from a falcon into a dove in his last years in the White House. Whilst president Gorbachev hired US PR agencies to help with his image (quite successfully, he gained the support of Margaret Thatcher and Francois Mitterand), Reagan had suffered a set back in the Iran affair in late ‘86: his prisoners for weapons deal cost him the support of his political base, and, for once, the great communicator had to retreat. In the end, Reagan even retracted his “evil empire” outburst: in the presence of Gorbachev he told reporters in Moscow “this quote belonged to another time, another era”.

The footage of Ronald and Nancy Reagan in Ronald McDonald costumes, entertaining a group of children, might be the funniest of this lively and often witty documentary, the overall perception is that, even if the Reagan presidency was “an MA in PR” compared with the present White House inhabitant, Ronald Reagan was a balanced human being. MT