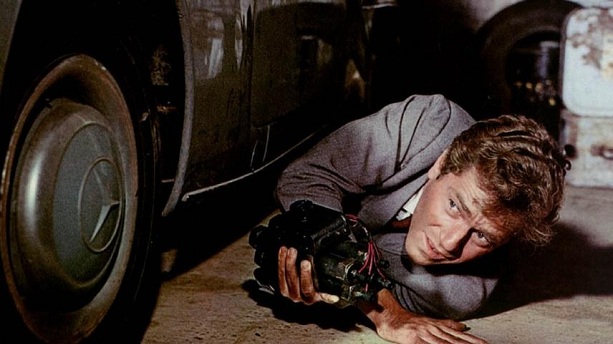 On the crest of the commercial wave of the Bond spy movies of the 1960s came a plethora of espionage dramas of varying quality – from the trenchant realism of The Spy Who Came in From the Cold via the cool adventures of The Ipcress File to the spoof mad antics of In Like Flint, spies and Cold War machinations were potent box office. Michael Anderson’s The Quiller Memorandum is one of the oddest and most pleasing of these products. Paranoia about who knows what you’re actually thinking is nakedly emphasised. Not because of Anderson’s direction – which was efficient and workmanlike – but through the agency of a fine cast who deliver the cryptic menace of its Harold Pinter script.

Twenty minutes into The Quiller Memorandum we depart Fleming land, lean on Le Carre territory then fully enter a Pinter Picture Playhouse. Take the film’s main interrogation scene. Quiller (George Segal) is a spy in Berlin sent to discover the headquarters of a neo- Nazi organisation that have just killed two British operatives. Quiller is captured by the group and secretly taken to the basement of their building. Their leader Oktober (Max von Sydow) instructs a colleague to inject Quiller with a truth serum. During the interrogation Quiller keeps fracturing his truthful replies as he stares at a painting of a naked woman on a couch. Quiller recalls yesterday and his sexual liaison with a schoolteacher Inge Lindt (Senta Berger). At every question about the name of Quiller’s boss, he replies Inge. To which Oktober taunts him about the woman. Here the manner of the writing very much recalls Stanley Webber’s interrogation by the two gangsters in Pinter’s play The Birthday Party (interestingly Pinter once said (a South Bank Show interview) how much the stress of the WW2 and Nazism had been an element to surface obliquely in his work.)

Pinter’s script continually drives and dominates The Quiller Memorandum, so as to become the film’s real auteur. In exchanges between Gibbs (George Sanders) and Rushington (Robert Flemying) at their London Club we’re introduced to the MI6 puppet-masters. The absurdity of their exchanges has less to do with Quiller: it’s about the quality of their lunch and envy about who is going to attend the Lord Mayor’s banquet. Pinter exhibits a darkly comic spin on some favourite themes of class and power. Along with the arrogant assertions of spy boss Pol (Alec Guinness) they’re brilliantly delivered asides, appearing more important than Pinter’s job in writing a spy thriller plot. What happens in The Quiller Memorandum is not so much Cold War trickery and betrayal but a psychological cold war of provocation and response made amoral and apolitical. Paranoia becomes a natural state of being and surveillance feels as normal as breathing.

In the last half hour we return to thriller conventions with an exciting chase on the metro. But even its resolution is intentionally anti-climactic. In Pinter’s private spying world people just watch, watch again and suspect. John Barry supplies some fine atmospheric music and the wide screen is effectively employed by Anderson – always kept second in command to Pinter. The dialogue’s delivered perfectly clearly by a sound recording not intended (as later on) in the spy genre to emphasise mumbling and incomprehensible facts. I think Fox should really re-title this movie as The Pinter Memorandum. Alan Price