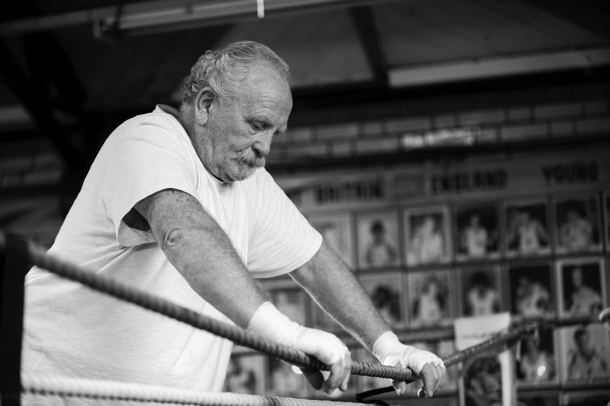 In their debut feature, the Shammasian Brothers focus on a lonely and embittered ex-boxer and coach as he recalls a life of repressing his emotions, leading to the death of his only son.

Ray (James Cosmo) sits alone in a boxing ring, sharing his life story – a mixture of regret and pseudo-philosophical meanderings – into a video camera on tripod. Crucially, it centres around his inability to come to turn with his own fears – drowned mostly in alcohol – and his failure to empathise with his son Bomber (named after Joe Louis), who ran away from what looked like a great boxing career. There are very short flashbacks featuring Bomber, but apart from these, Ray pontificates in absolute loneliness.

More of a one-man stage-play than a film, The Pyramid Texts feels aesthetically like a re-run of the grainy black-and-white world of the British cinema of the early 60s, with shades of Karel Reisz’ Saturday Night and Sunday Morning, where sporting heroes from the working class bemoan their fate. Whilst being behind the times with its raving monologue embodying clichéd male excuses, the Shammasian Brothers also abstain from building a dramatic arc: this is unadulterated, repetitive ‘pub talk’ dressed as soul searching. All credit goes to James Cosmo who keeps the film together with an emotional performance of raw intensity, but even he struggles sometimes with the sheer banality of his lines. A tacky ending makes matters worse for a production which does not suffer from the restraints of its mini-budget, but the lack of insight and imagination of its writers/directors. AS