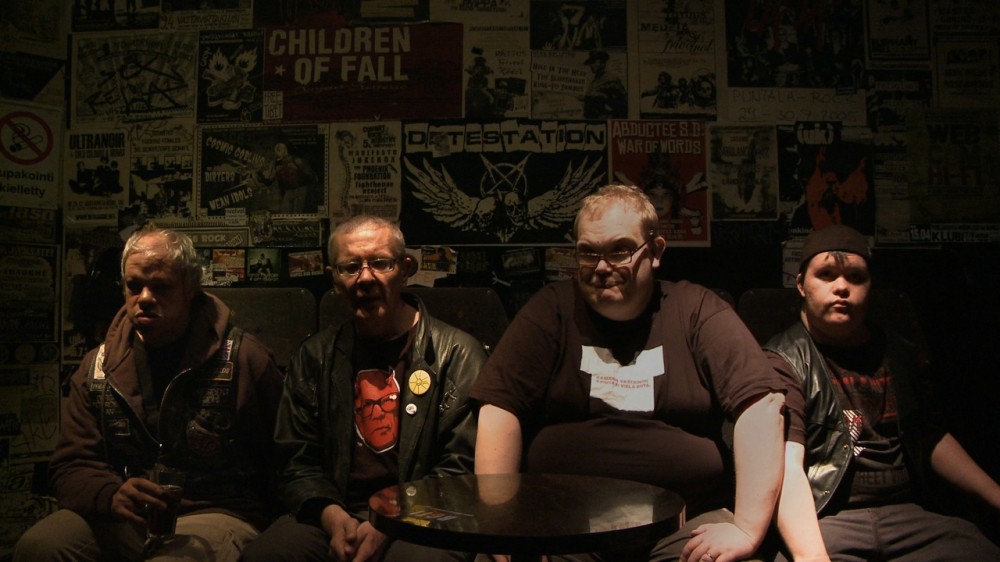 A truly one-off music documentary about unlikely Finnish Punk sensation, ‘Pertti Kurikka’s Name Day’; a band made up of two obsessive Down’s Syndrome sufferers and a mentally disabled lead singer with rage issues. You just couldn’t write it. No, you wouldn’t be allowed to write it. But then, isn’t punk all about throwing ‘PC’ out the window?

THE PUNK SYNDROME is an at once a joyful and poignant study following the band’s rise and their trials and tribulations, without the smooth PR one might normally bounce off when trying to document a band both at home and on tour. What thus follows is an extraordinarily candid insight, not only into the band, but also into what it is to live an institutionalised life on the margins of society and how blurred that line can indeed be with the rest of us.

The documentary has already played at Tampere, Visions Du Reel, Helsinki IFF- Love and Anarchy where it won Special Prize Visions Du Reel and Best Film/Films On Art Competition New Horizons IFF.  What makes it work so well is unflinching access straight through to the humanity of the players; four men who recognise that their lives really aren’t that great, but who manage to negotiate their own selves and vent the vast majority of their frustrations through their music.

It is noticeable at some of the various gigs that the audiences start out thinking they’re perhaps going to witness the performing equivalent of a train wreck, but in the end are simply won over by the heart, brutal honesty, energy and pretty funny lyrics that come out of these four committed musicians, through some enthusiastically thrashed out titles such as ‘Speech Defect’, ‘ADHD’ and ‘Decision Makers Are Cheaters’.

As the guitarist and songwriter Pertti says, ‘This isn’t about honour, this is about punk’. THE PUNK SYNDROME has some brilliant laugh out loud moments, but one cannot also but be genuinely moved by the plight and frustrations of these guys who, despite the way their lives are stacked, remain resolute in raging against the machine. And I can promise you, you’ll never look at pedicurists in the same way again. Pure Gold. Ian Dury would be proud. AR