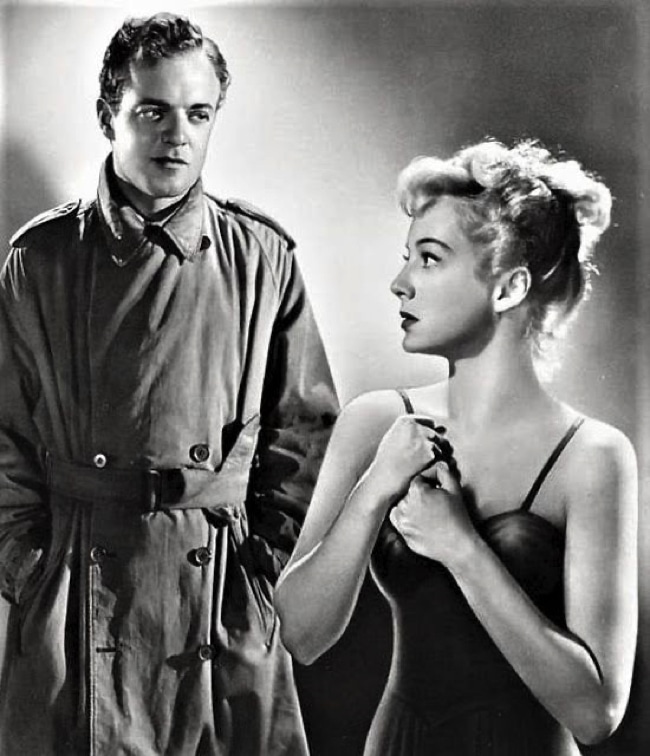 The Prowler was Losey’s favourite among the five Hollywood features he directed before blacklisting forced him to emigrate to Europe. The HU-AC witch hunt also affected the film’s writers Dalton Trumbo, Hugo Butler, PD John Hubley and German émigré writer/director Hans Wilhelm, who co-scripted the project.

The alternative title The Cost of Living, is actually a more appropriate one for this rather nasty little noir thriller that takes its cue from Billy Wilder’s Double Indemnity. Losey’s feature has nothing of the grandeur of the Wilder film, being simply a story of mundane greed and lust. Fred MacMurray’s insurance salesman Walter Neff has a a shred of charm and a conscience, even though he ‘mislays’ it. His equivalent here, police officer Webb Garwood (Van Heflin), is just in it for the money and the sex.

LA socialite Susan Gilvray (Keyes, married at the time to co-producer John Huston) has been disturbed by a prowler. Inspector Webb Garwood (Heflin) fetches up at her mock Spanish villa with his partner Bud Crocker (Maxwell) – the good cop – who will shadow his buddy to the bitter end.

Webb is smitten by the lady, but much more impressed by her wealth. Susan is married to William (Tracey)M a late-night radio host who is infertile. After rebuffing Webb at first, Susan falls for him, and they have an affair. Webb then sets up a scene where the “prowler” (who is none other than Webb, having the foresight to use the William’s revolver) shoots the husband dead, grazing his skin.

The inquest is quickly over, but Susan discovers she is four months pregnant by Webb – something the couple clearly need to keep a secret. They travel to a quiet backwater in Yermo, California, to wait for the birth of the child. But complications arise, and Webb fetches Dr. James (Chambers) from LA. Susan, who now knows the truth, is afraid Webb will also do away with Dr. James after he is no longer needed. Webb flees when the cops show up in town, but instead of surrendering, he takes the bullets from his former collegues.

The Prowler is bleak and also rather squalid with its petit-bourgeois values. Webb is corrupt, using his position in society for murder. He is the “typical” victim of circumstances: a former basket ball player, whose career had been cut short by injury. Webb wants to take revenge for his misfortune, and has no qualms about his victims. Susan is a superficial woman, only in the end mustering some moral fibre. This was the last feature for veteran DoP Arthur C. Miller (The Song of Bernadette), who was elected as President of the American Society of Cameramen, dying in 1970.

Producer SP Eagle (Sam Spiegel) had a lot in common with the anti-hero of the piece: making Losey and his writer Trumbo sing for their supper, and in the end having to seek recourse to justice for their fees – including the USD35 Trumbo was paid for giving his voice to the radio host. AS