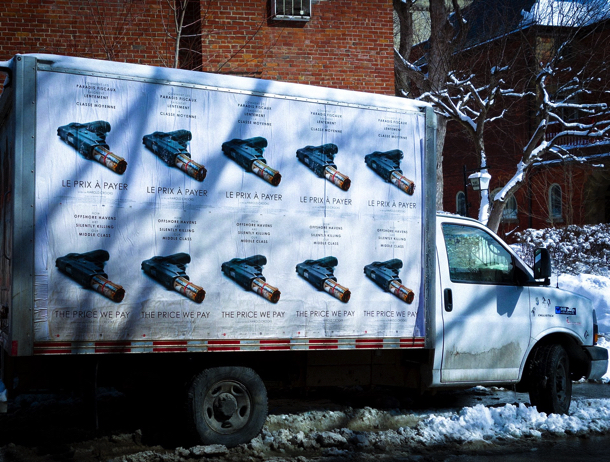 At least the UK can claim to be trailblazing in one very important field of world-wide economy: the first tax haven was created after the end of WWII in the City of London, when the government granted the City control of unregulated trading of US Dollars. In the 1980, the Cayman Islands and the Bahamas followed, and the end result is that at the end of 2010 between 10% and 15% of the world’s wealth – or $ 32 trillion – is tucked away in offshore tax heavens.

Harold Cooks (Surviving Progress) has interviewed the major participants, based on the book “La Crise Fiscale qui Vent” by Brigitte Alepin, who co-wrote the script with the director. During the last decade this fiscal inequality has seen the demise of the middle classes: growing tax demands from governments, and less income plus fewer employment choices, have brought the class, who once seemed to be the pillar of the capitalist society, to its knees. Because tax avoiding is easy – for multi-nationals – and in most cases perfectly legal. Let’s take Apple, who is working from Silicon Valley in California. The US company contributes only a third of its profits in taxes to the well-being of its citizen: two thirds of their turnover is not taxed, thanks to a “double Irish” arrangement with the Republic of Ireland. Google and Amazon are two of the other most well known offenders: they use this Shell-company system to ferry the money from account to account with impunity due to the tax authorities of individual countries, who are cheated out of billions in unpaid taxes.

And when the representatives of the accused companies face the music of parliamentarians on both sides of the Atlantic, the elected MPs are well aware of their helplessness: calling the dealings of the Multinationals “immoral” as one British MP did, is the acknowledgement of the status quo.

Strangely enough, three of the richest men in the world; Bill Gates, Warren Buffett and George Soros, have called for a “Robin Hood Tax” on stock trading. But again, this is hardly workable, because the governments are competing with each other for the goodwill (and employment program) of the big companies: if one country should go it alone in taxing the richest companies, there might be enough contenders who will allow their financial institutions not to enforce the tax.

Whilst THE PRICE WE PAY is content-wise impeccable, the constant onslaught of data is occasionally undecipherable, and the permanent talking heads (who are on top of it very badly lit) make the experience much more of an ordeal than an enlightenment – which is a shame, since we are all victims of these tax-avoiding schemes. Worthy but un-engaging. AS