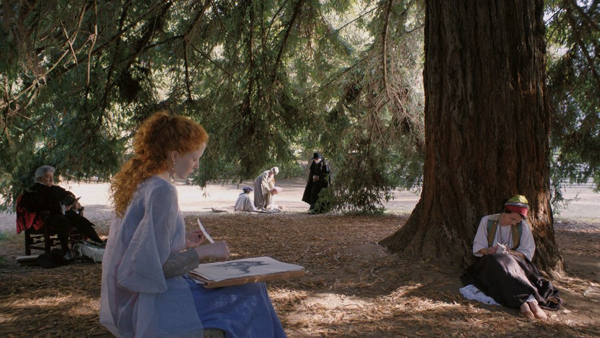 A languid and painterly reflection on art, feminism and beauty and the latest drama from award-winning filmmaker Rita Azevedo Gomes whose debut A Coleccaio Invisivel was based on a 1924 novella by Robert Musil, a contemporary of Stephen Zweig.

Although the timeframe is ambiguous, the setting is Europe – possibly Sintra – somewhere between the 17th/18th century. The film opens with “Unter den Linden”, sung by Ingrid Caven, who accompanies the narrative like a Brechtian chorus as we meet the recently married Lord Von Hutten (Urgeghe) and his wife, the titular Portuguese woman (Riedenstein) whose year-long honeymoon has been brought to an abrupt end when Von Hutten is called to battle by the rather combative Bishop of Trento (Costa): “War is made of debt, and peace is the conduit of corruption and vice”.

When Von Hutten finally returns to his wife and child, who are living in his decrepit castle, she has been enjoying a lengthy visit from her cousin Dom Pero Loboto (Vicente), whose stay has given rise to local gossip, and murderous jealousy on the part of the conquering soldier.

Lavishly mounted and sumptuously captured by DoP Acacio de Almeida whose intense images bring to mind the paintings by Pieter Bruegel the Elder, Gomes cleverly transforms Musil’s mysticism, his metaphors for humankind’s failure to retain traditional values, above all love, into landscapes shrouded in mist where the derelict castle represents a refuge from the outside world of strife. Manoel de Oliveira regular Agustina Bessa-Luis comes up with some brilliant dialogue pieces performed with languorous resonance by a superb ensemble cast. In the style of Oliveira, Gomes draws from literature and the world of art to create intentionally static scenes enriched by transcendental poetic realism in this enchanting and magical drama. MT