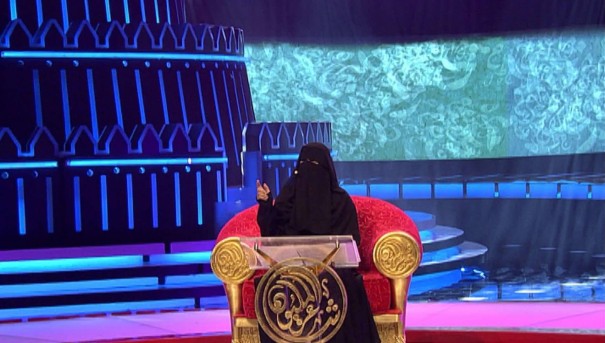 Hissa Hilal, Saudi poet and political activist in her forties, has made some ground-breaking literary efforts to push out the boundaries for women in Saudi Arabia. Veiled in her burqa she is a vehement critic of fundamental fanatics and Islamist terrorism. To be an outspoken woman and a poet in the Muslim world is an act of courage on its own, but to attack the predominantly male audience in the studio on live TV, goes a step further.

Ms Hilal is the focus of this enlightening documentary from Stefanie Brockhaus (On the other Side of Life) and Andy Wolff. We learn how she became the only woman competitor in the “Million’s Poet Show” 2015, televised to an audience of 70 million from Abu Dhabi (United Emirates). Remia (her mother does not let her use this name on TV), is married to another journalist and poet, who stands by her during the crisis following her appearance in the reality show, filmed in a TV studio with the most garish and gilded decor known to the modern world. It is a miracle in itself that she even reaches the grand final, where she will compete against five men. Covered in an abaya hijab and a burqa, Hissa attacks the unfaithfulness of men, and even more daring, she condemns the muftis, the issuers the Fatwa, all through her clever poetry. Needless to say, a Fatwa has been issued against her, a death threat, for which she is prepared: “If they kill me, I will be a martyr for humanity”.

For Hilal, “religion is a private matter, but is manipulated today for political ends”. Clips from documentaries from the early 20th century support her thesis clearly stating that a hundred years ago, Bedouin women could move around freely, have their own business and did not wear the burqa, which was only introduced later, “because beautiful women caused conflicts in the desert”. She remembers her youth, when Saudi Arabia was a much more liberal country. She watched television in the 1970s “when the parents forbid them to watch Egyptian movies. But we stayed up, until the parents were asleep and then enjoyed the forbidden features”. The change in Saudi Arabia and the Muslim world came in late 1979, with the Juhayman incident in Mecca when 270 people were killed and over 500 were injured. The revolt was lead by Juhayman al-Oteibi and Mohammed Abudl al-Qahtan, the latter claiming to be the Mahdi. The Saudi monarchy, feeling threatened by the clerics who accused them of selling out to Western culture, placated the religious leaders by giving them control over the whole of society: media, culture, education, everything. The interaction of genders was the first victim: even in the TV studio, genders are separated.

One of the most interesting elements of the film is seeing the contrast between the cities of Riyadh and Abu Dhabi and more liberal Oman, which is photographed both from an aerial perspective and with the camera moving freely through the streets and malls, evoking a authentic feel for Saudi Arabia and the Sultanate of Oman.

Tension builds in the grand finale “Million’s Poet Show”. The audience are clearly rooting in Hilal’s favour, but there’s bound to be some manipulation behind the scenes to ensure a male wins. She does not expect to be victorious and sadly her fears are realised. “They like to see me defeated, it’s really hate”. Her income from writing enables her to buy herself a house in Abu Dhabi; in the capital Riyadh this would not have been possible, and certainly not in the UK. She might have avoided the consequences of the Fatwa, but is not sure, when she will see her family again. This real eye-opener should be screened globally for all to see. MT