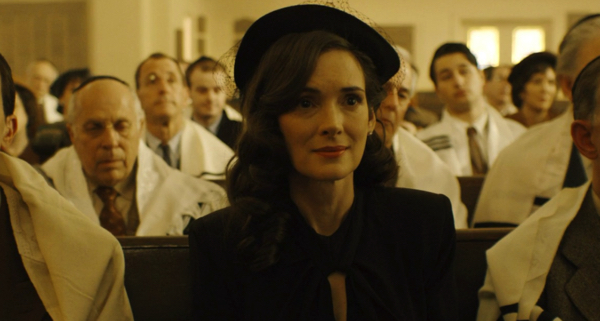 This ground breaking six-part HBO TV series is outstanding. Written by David Simon and Ed Burns (The Wire) and based on Philip Roth’s 2004 alternative history novel of the same name, it shows how Fascism came to America in 1940. A brilliant cast, imposing re-creation by PDs Dina Goldman and Richard Hoover, who, like the directors Minkie Spiro (Jessica Jones) and Thomas Schlamme (Westwing) share the six episodes of this staggering production of alternative US history: “It Could Happen Here”.

Many will remember the theme tune “The Road is open Again”, an old Warner Brother’s short film score promoting Roosevelt’s New Deal episodes. This ushers in the Levin family in their home in Weequahic, Newark/New Jersey in the summer of 1940, a few months before the Presidential Election in the autumn of the year. ‘Its a done thing’, that Franklin Delano Roosevelt will be elected, at least for his staunch supports Hermann Levin (Spector), selling life insurance for a living, and his wife Bess (Kazan), who keeps the family tightly organised. Their oldest son, teenager Sandy (Malis) has a talent for drawing but disagrees with his father’s outlook on life, that only Jewish affairs matter. The youngest, Philip (born like the author in 1933), is much more interested in his friends than in politics. Hermann has just given up the idea of a promotion which would enable the family to move into a bigger house, having seen beer-slurping members of the Fascist “German-American Bund” in what would have been his new neighbourhood.

Opposing Roosevelt in the election is the pilot-hero “Lindy” Lindbergh (Ben Cole) of ‘Spirit of St. Louis’ fame, who is a believer in eugenics, a supporter of ‘America First’ and a vicious Anti-Semite. The real Lindbergh, who shared the political outlook of his fictional double, was not selected as candidate of the Republican Party. Lindbergh put a simple phrase forward and repeated it at nauseam: “This is between Lindbergh and War”, implying that President Roosevelt would ‘drag’ the USA into the European War. Lindbergh won in a landslide.

Meanwhile Bess’s sister Evelyn (Winona Ryder back and better than ever) is looking after their mother (Reissa), and has fallen for conservative Rabbi Lionel Bengelsdorf (Turturro), an avid supporter of Lindbergh. A grateful president gives Bengelsdorf the leadership of the “Office of American Absorption”, a scheme designed to evict Jewish families from their homes on the East Coast, to the American “Heartland” of the South, where the KKK and other racist organisations hold sway supported by the authorities. This brings about another conflict between Sandy and his father, the teenager claiming to not having seen KKK members when he spent six weeks in Kentucky with a farmer. Cousin Alvin (Krumholtz) is a small-time gangster and clashes with Hermann, but gets the thumbs up from Sandy. Alvin finally flees to Canada, where he joins the Army, losing a part of his leg. In a bid to bury their differences Hermann invites Alvin (“family is family”) to live with them again.  Alvin is able to gain the attention of his boss’s daughter, helping her father to fight off a gang robbing his arcade machines, and setting up a lucrative future and marriage, thanks to his skills as radar operator acquired in the in the war.

But Lindbergh has changed the political climate: with slogans such as “the USA will not be part of the war in Europe, because it was caused by Jews”, the Jewish minority is victimised, Anti-Semitic attacks having become common. Hermann is hassled by FBI agents for offering a home to a ‘criminal’ like Alvin: the young man has contravened the American Neutrality Act which forbids any involvement in the War.

Philip is ‘introduced’ by his wealthy friend Earl Axman (Yosowitz) to the world of female underwear. Meanwhile the father of his friend Seldon (Laval), the Levin’s next door neighbour suddenly dies. Jews start to emigrate to Canada, including Hermann’s best friend Shepsie (Kostroff), the projectionist of the newsreel cinema in Weequahic, where the two watched Hitler’s rise in Europe. The Levins are now put on a list for a new “home”, Hermann has been “transferred” to Kentucky by his company. He resigns and works for a greengrocer. Bess insists on emigrating to Canada, after begging her sister Evelyn in vain to be taken off the list for the ‘exile’ in Kentucky. Seldon and his mother Selma (Sieh) are not so lucky, they have been put on the list for Kentucky, because Philip told his aunt Evelyn that he would miss Seldon, if only the Levins would have to move. One day, the troubles rising, Bess gets a phone call from Seldon: his mother is missing. Hermann and his two sons drive to Kentucky, only to learn that Selma has been burned alive in her car by the KKK. Even though the roads in the South are full of patrolling KKK members, Hermann brings Seldon ‘home’. Then, in the midst of a looming civil war in the country, President Lindbergh, flying his own plane, is reported missing.

There is so much to enjoy and admire in this series: Turturro’s operatic appeaser; Evelyn’s social climbing – she even dances with Nazi Foreign Secretary Joachim von Rippentrop at the White House during his visit; history unfolding as Hermann and Shepsie watch from the projection room at the cinema; the entire social dynamic of the Levin family.

Put at its simplest, The Plot Against America is an eye opener: the ‘America First’ and White Supremacist movement has always been virulent – but it takes a populist president to give them credence and light the fire. Never has history been so cleverly and affectively foretold. AS