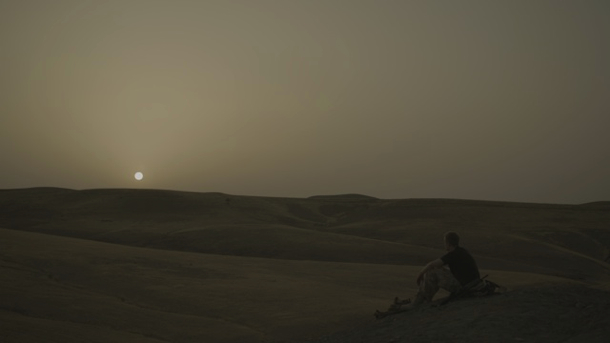 Afghanistan, Helmand Provence, 2006: A patrol of seven British soldiers are fighting an unseen enemy. The two officers in charge are out of their depth, equipment and supply are not up to scratch. As a result of a faulty body armour, one of the soldiers is wounded and later dies in hospital. Finally the men revolt and the lieutenant, who has just become a father, sides with the soldiers. The mission, set originally for three days, but lasting well over ten days, is finally  abandoned. The soldiers have no clear objectives: they can’t protect the civilian population, who sees them as intruders, and they know that the Taliban will return when they are gone. The events shown are a microcosmos of the British involvement in this war.

TOM PETCH  served for eight years in the British army and his view of the fighting conditions the soldiers find themselves in is highly critical. The camera shows unrelenting spaces of sand in which the soldiers are viewed as ants, trying to find an enemy which hides, and will take their positions, the moment they have gone. They are supposed to support the community of poor dwellers in their primitive houses, but all they do is endanger them, when they mistake a football for a grenade. Petch shows the boredom, the repetitions and the resignation of the man, and the useless hurrah-patriotism of the Captain. Everything is as real as possible, but herein lays the main problem of this film. Anybody having watched countless hours of TV news is able to imagine the dreadful, monotonous slug of this war, with all the shortcomings the soldiers are suffering from. What the film shows is honest, non-judgemental, unquestioning of the doubtless bravery of the soldiers involved, but all these facts are known to a huge majority. But a simple reconstruction of the fighting conditions is (as shown here) is not enough to create strong emotional or intellectual reactions in the viewer. What we would have liked to have known is what sort of people sign up to the army, in which physical and psychological condition do they leave the army – if they leave alive at all. Three Prime Ministers have sanctioned this futile war, calling the same people who fought the Russian Army in the 80s insurgents, but the public reaction is muted to say the least. And however heartfelt this film may be, it does not help to stir up any badly needed outcry against this war. AS

THE PATROL IN ON GENERAL RELEASE FROM 7 FEBRUARY 2014