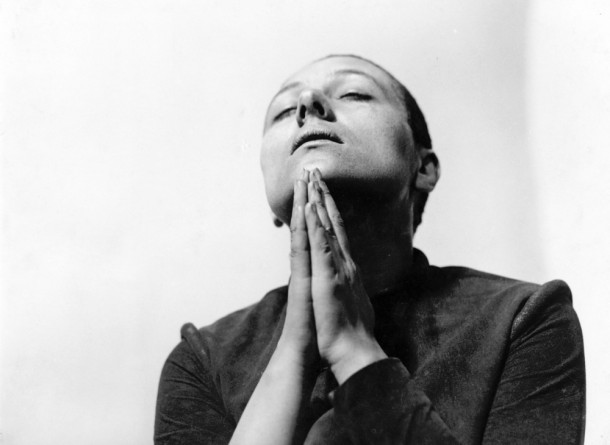 The close-up is one of the most potent means by which a filmmaker can make a point. It tells us what a character is thinking or feeling in an instant. Yet close-ups can produce emotional overkill – the ‘lesbian’ love story Blue is the Warmest Colour (2013) is an example of employing the technique so often that the film is unable to breathe.

So what are we now to make of Carl Dreyer’s The Passion of Joan of Arc where the entire drama is the close up? It has been called the supreme close-up film (not quite true for medium shots are also inserted). Yet Dreyer inescapably creates a film where the human face is the focal point. The face of Joan (the accused) and the faces of the clergy (the interrogators) are filmed with an unbearable tension.

The Passion of Joan of Arc taxes the viewer not with an excess of looks, but with intense spiritual intimacy. The critic Béla Balázas described Dreyer’s film as ‘a drama of the spirit’ enacted ‘in duels between looks and frowns.’ Joan is played by the French stage actress Maria Falconetti. Dreyer certainly found his Joan with Falconetti. He said that ‘She didn’t act for me. She just used her face.’ Falconetti’s androgynous beauty gives her performance a timeless quality. Her ‘acting’ or ‘being’ is magnificent.

The Passion of Joan of Arc is based on the 15th century records of Joan’s actual trial. Being a silent film we only get inter-titles. However Dreyer asked his actors to read out the records, even though we cannot hear what’s being said. This was Dreyer’s need for scrupulous authenticity. He also asked for the building of a medieval town and fort (rarely used) and the tonsuring of the male actors. Most of his film takes place in a set of stripped down purity. It was never meant to be a costume drama with medieval ornamentation. Not only does it look accurate, but it is also anti-naturalistic. To get at the soul of Joan’s story, Dreyer employed a radical editing style. A tableau of close-ups is often ‘irrationally’ employed to reveal the inner conflicts of each character, and not just logically to whom the dialogue is being addressed. The film has distortions of time and space. Actor’s bodies are rarely filmed below the waist. This abstraction takes the audience off guard. If space seems very strange, then cinematic time is also compressed, leaving us unsure if it’s an hour, day or a week that’s passed.

Many consider The Passion of Joan of Arc to be one of the pinnacles of silent cinema. It is certainly one of the best examples. Perhaps Dreyer’s last film Gertrud (1964) would be my favourite amongst his films. But Joan’s trial has to be experienced. 87 years old and still so essential, disconcerting and very moving.

A final suggestion. To fully experience Joan’s trial play the DVD/BLU RAY without choosing a music option. For me it’s probably the only silent film that benefits from being watched in total silence. Alan Price

THE PASSION OF JOAN OF ARC IS AVAILABLE ON MUBI