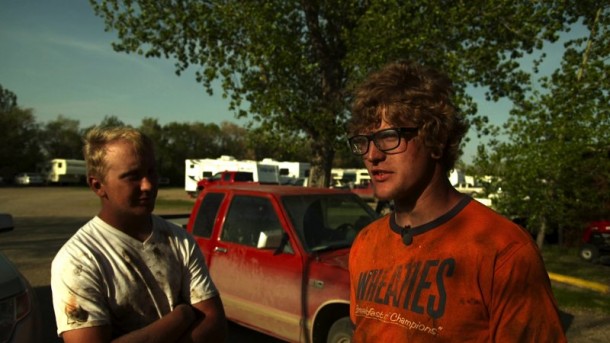 Never has a film about the devastating effects of economic migration managed to be so haunting and visually appealing. In his effecting and humanistic Sundance-awarded documentary, Moss examines the men who have been disenfranchised in their search for honest work. But this exposé of victims of the oil industry boom also develops into a morally complex study of the issues surrounding religious and community guidance, elevating it above its seemingly mundane subject-matter.

In a small town called Williston, the population has doubled since 2010. Drawn here by the promise of jobs in the oil-related side of fracking, those who have arrived are caught between the soaring costs of local housing and the need to have a local address to satisfy employment regulations. Moss choses the sympathetic figure of Paster Jay Reinke to illustrate the plight of these people. Converting his Church to a makeshift sanctuary, each night he accommodates the vulnerable and homeless, despite bitter opposition from his congregation on the grounds that many of the ‘Overnighters” are petty criminals, addicts and even sex offenders – according to a local rag.  But Moss is non-judgemental in his approach, it is Reinke who provides the caring but controversial standpoint as he champions those who have somehow lost their way, seeming to alienate his existing parishioners in the process. And the problem doesn’t go away: the pastor is forced into defence mode in distancing himself from his new protegés, giving this engaging piece dramatic tension along with its engaging ethical and moral dilemmas. Themes of xenophobia and community leadership are teased out as the doc unspools, shining a light on the the pastor’s validity as a religious man of God and also questioning his responsibilities to his wife and family.

Moss remains pragmatic in his stance through all of this, despite including an emotional scene between the pastor and his wife. The final segment of the documentary is testament to the human qualities of our moral and religious counsellors showing them also to be occasional victims of judgement and subject to the vagaries of real-life events and people which are, by nature, beyond their control. With an atmospheric score by T Griffin giving the film a tangible sense of place and Jeff Gilbert’s superb visuals blending hard industry with the astounding natural beauty of North Dakota, The Overnighters makes for an absorbing and moving piece of filmmaking.