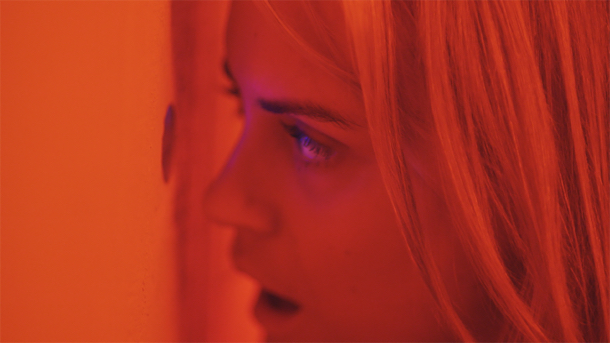 Writer/director Patrick Brice (Creep) can lay claim to having created the most toe-curling movie of the decade.

A young and very straight couple Alex (Scott) and Emily (Schilling) have recently moved to Los Angeles with their small son RJ, who introduces himself in the first scene, disturbing his parents’ lovemaking.

Later on in the park, his parents meet Kurt (Schwartzman) and his French wife Charlotte (Godreche) with their son Max, who invite them over to their house. Alex and Emily feel inferior since this home is vast and expensively furnished. After inhaling some substance from a pipe, the couples go swimming in the pool – Alex keeping his shorts on, because, as we soon learn, he has body problem: he considers his penis too small. Given that Kurt is extremely well-endowed we can appreciate his modesty. But Kurt, a pseudo-artist, who makes a living from self produced DIY videos featuring his attractive and well-stacked wife, is only too willing to help Alex with his problem. Charlotte than takes Emily to a massage parlour where she gives a stranger a hand job; Emily watching through a one-way window.

Back at the show home things come to a head – quite literally- Charlotte tells her guests that Kurt wants to sleep with Alex, explaining that “we do everything together, but have no sex life”. Alex and Kurt kiss, fall together onto the bed, fumbling prudishly, whilst the women grope them. Luckily JR and Max interrupt further action. Back in the park, we learn that all is solved: Charlotte/Kurt are seeing a therapist (!), and Alex/Emily will acquire a really big dog.
If you imagine that THE OVERNIGHT is aesthetically as bland as it’s narrative is cringeworthy, you get the general idea. AS