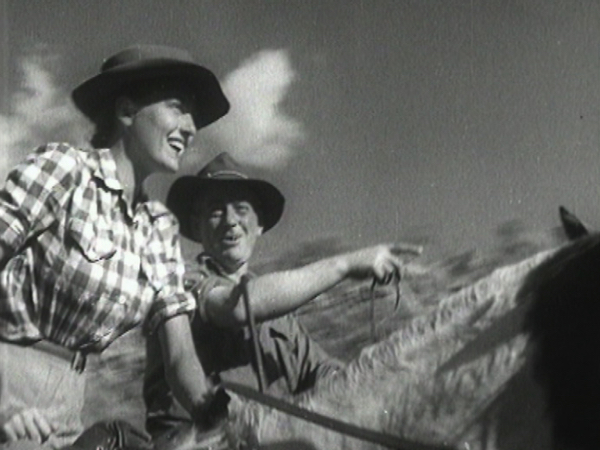 This big country wartime western was a resounding success in Australia, although the director Harry Watt was a Scotsman. The Overlanders certainly stands the test of time with its simple message of patriotism and courage in the face of the enemy. Watts had honed his craft as a documentarian and those skills certainly served him well in crafting a rousing cinema verite docudrama, bristling with widescreen action sequences and set in the early days of the war in rural Australia. The locals are being advised by the government to flee the encroaching Japanese enemy, shown in a propaganda poster in the opening sequence, advising a scorched earth policy for their land and livestock.

But not Chips Rafferty. The Australian star in the making (a standout of Wake in Fright) plays pioneering drover Dan McAlpine who takes it all in his stride as an adventure to get his family, precious horses and 1,000 head of cattle down to the nearest safe haven 1500 miles south east in Queensland. The script errs on the didactic side but in an endearing way, making this informative as well as compelling viewing. McAlpine pits his wits against nature in the hostile terrain of Northern Australia, a feat requiring physical force as well as intuitive savvy.

The reason for the docudrama approach stems from the original idea of making a propaganda film for the Australian government who knocked on Watts’ door looking for a well known director and a reputable studios – Ealing naturally fitted the bill, although the film was released after the war was over.

The odds are against Chips and his team and they encounter all manner of obstacles from crocodile infested rivers to poisonous vegetation, which kills a large number of horses. The climate is unforgiving, the main problem being the scarcity of water. But they persevere, undeterred. Women come off well too, they are not butch or coarse, but graceful and daring, rocking well-tailored khaki fatigues, check shirts and cowboy hats. Aborginals also play a lowkey part and are treated with respect and dignity. The film really is a tribute to human endeavour and fortitude, the tone pragmatic and upbeat throughout. The scenes showing cows falling off a cliff are particularly difficult to watch but all this makes it real and convincing, superbly shot in lustrous black and white by Canadian Osmond Borrowdaile who had worked with Cecile B. DeMille, and later became a dairy farmer. Maybe this wonderful experience inspired him. MT