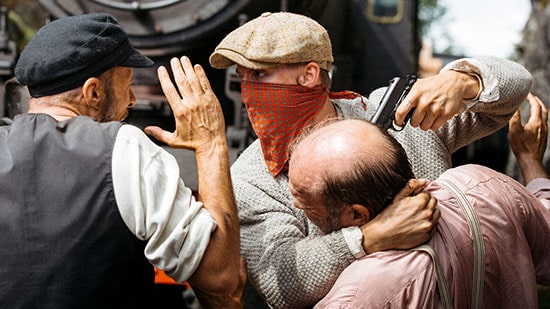 This Norwegian take on Bonnie and Clyde, also based on real life, is remarkable for its visual allure and picturesque beauty in startling contrast the carnage that erupts when a young drifter loses his way in a ‘follie a deux’ set in 1920s Sweden.

Johannes (Hoeg) really needs a role model in life, and he finds it in fellow lumberjack Peder (Helstod), an older man who offers some sort of security. But when Peder is killed in a tree-felling accident, Johannes takes up with another, older man, in the shape of Mikhael (Berg), who impresses the young labourer with his stories of America but soon turns out to be a dangerous psychotic, who has stolen the car he is driving.

The two men derail a train. But Johannes is shocked to discover that Mikhael is also a murderer, killing two policemen who give chase, and quite obviously enjoying the experience. And it doesn’t stop there. The two of them hide out in a house belonging to a man and his daughter and then take off in another stolen car in a finale that is quite remarkable for the stark contrast in the two men’s reactions.

Dahlsbakken does not enlarge on the sexual angle of the relationship, but it is clear that Johannes, who has slept with women before, is really just looking for love and protection, which Mikhael, who is certainly gay, takes advantage of. Johannes is prepared to go along with Mikhael’s psychotic outbursts just to avoid being alone. Outwardly masquerading as a softly spoken educated man, Mikhael, emerges a psychotic monster, with no feelings for Johannes or anybody else, for that matter.

Berg is impressive as ‘Lucifer’, Hoeg playing the perfect ‘lap dog’ who just wants to be loved. The Swedish countryside is a wonderful background for the exploding mayhem, the director continuously probing the dissonance between the two elements highlighted in DoP Oskar Dahlsbakken’s stunning camerawork. AS