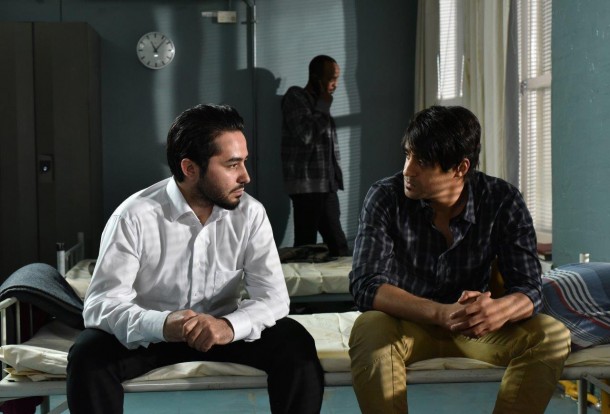 The grass is always greener on the other side especially when your business is failing or you live in a war zone. Aki Kurismaki’s latest film is an unapologetically upbeat story of dystopia in modern day Helsinski where two lives converge – that of Khaled, a Syrian refugee and stowaway on a coal freighter and Wikström, a Finnish travelling salesman peddling ties and men’s shirts. Treating his characters with even-handed sympathy and understanding Kurismaki evokes a realistic picture of the local refugee crisis as well as the economic malaise affecting contemporary Finland.

When Khaled claims asylum at the government offices, he is bathetically told: “you are not the first”. This is the start of many telling observations that give THE OTHER SIDE OF HOPE its spry and ironic humour. Meanwhile Witstrom leaves his wife and his business and, after a win at the poker tables, buys a local restaurant business. When the authorities turn down Khaled’s application, he decides to remain, going underground in the Finnish capital where he gets duffed up by the ‘Finnish Freedom League’ before some friendly street musicians offer support. And soon Wikstrom offers him a job in his new concern where the classic Kaurismaki community muddle along with the waitress, the chef and his friendly Jack Russell.

Starring regular collaborators Sakari Kuosmanen, Kati Outinnen and Ilkka Koivula, THE OTHER SIDE OF HOPE is witty and watchable and never takes itself too seriously in showing how the kindness of strangers goes along way to making the world a better place. MT