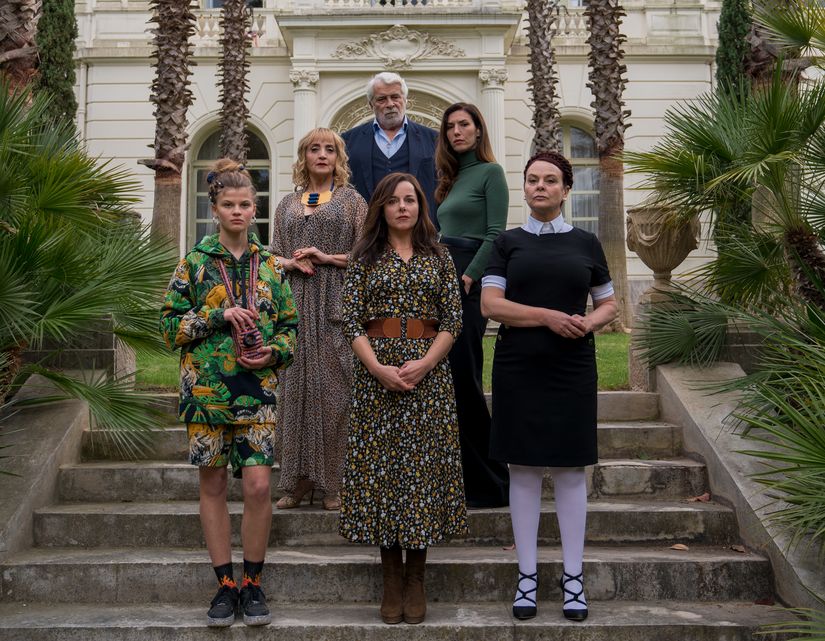 Sebastian Marnier’s stolen identity thriller is a bizarrre and curiously compelling film set on the isles de Hyeres, with a starry French and Canadian cast.

What starts as a mundane domestic drama that sees a modest woman called Stephane (Laure Calamy) working in a fish factory, soon develops into something much more mysterious, surreal and even violent when her ambitions find her in the company of a strange and dysfunctional family in a ravishing villa in seaside Porquerolles.

How she gets there is the crux of a narrative that hands on dramatic conceit, and to reveal her intentions too early on would destroy the entire plot. But after a telephone call one night to a man called Serge, purportedly her estranged father, and one-time mayor of Hyeres, Stephane is transported, by boat, to the sun-stroked shores of an island whose magical ambiance casts its spell over the remainder of the story.

Stephane has never met Serge’s second family: his ostentatious wife Stella (Blanc) whose profligate shopping sprees line the corridors of the expansive Belle Époque villa, her morose daughter George (Tillier), who runs his ‘business empire’ consisting of various restaurants; her plucky teenage daughter, and Agnes, a strange housekeeper channelling Mrs Danvers without her style and sang-froid. And we never really question Stephane’s background, so larger that life are the rest of the family. Their antics are so much more entertaining that Stephane’s rather mundane backstory as she makes frequent trips back to check on the fish factory (which it turns out she also owns) and visit her lesbian lover (Clement) serving time in a prison on the mainland.

The Origin of Evil sees Marnier in full control of script and direction concocting a sinuous story about jealousy and bitterness with a series of duplicitous characters all out for the main chance but not all motivated by the same goals. Due to a narcissistic wound  – her ‘father’ abandoned the family and gave her a man’s name as he really wanted a son – Stephane has never recovered from the humiliation. Stella (Dominique Blanc) and George (Doria Tillier) just want money and are determined to inherit the entire estate from Serge, by declaring him ‘senile’ in the court procedure that brings dramatic heft to the narrative.

Meanwhile meek little Stephane schemes away in the background massaging Serge’s ego and his painful legs, only to emerge the real villain of the piece. And although Marnier rather over-eggs the omelette in the overblown denouement, this is a deliciously wicked – and at times hilarious – world premiere making a memorable addition to the line-up at this year’s 79th Venice Film Festival.