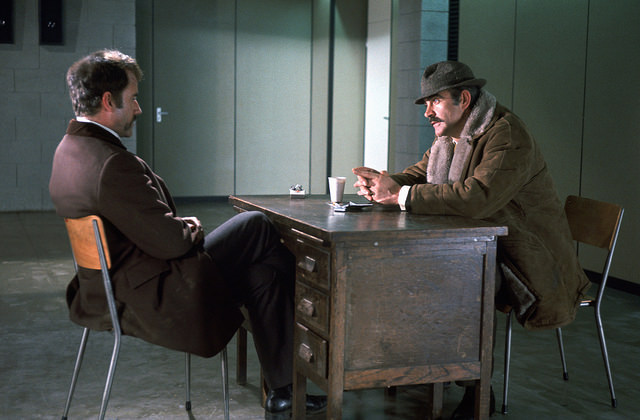 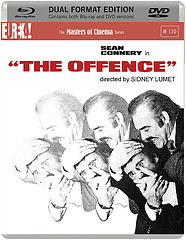 Sidney Lumet (1924-2011) was always interested in subjects to do with judicial justice; his first great success, Twelve Angry Man (1957) shows the interaction between very different men on a murder jury. There, as well as in THE OFFENCE, he tries to describe violent actions committed by men, whose own disturbing nature is not far removed from the suspected criminals they are dealing with.

Sergeant Johnson (Connery) is a burnt out cop who humiliates his wife Maureen (Merchant) with sadistic fervour. When confronted with the suspected child molester Kenneth Baxter (Ian Bannen), he sees very much of himself in the man, beating him unconscious in the end in this tense psychological drama that unspools within the confines of a police interrogation room. Later, when interrogated by his boss Superintendent Cartwirght (Trevor Howard), we see further parallels with Baxter: Johnson shrinks literally in front of Cartwright (“You are not up to it, still a Sergeant at your age”). Ambiguity runs through the fragmented narrative, the flashbacks underlining even more how close Baxter and Johnson are in their psychological profile. Whilst we never learn if Baxter is really guilty, Johnson’s reaction to the raped girls and murdered women leads us to believe that he too is very well capable of these crimes. Sexually frustrated and in a dead-end marriage himself, he tries to impose his own feelings onto Baxter, in order to draw a confession out of him. Finally, Johnson admits to Baxter that he has rape phantasies, and asks Baxter to help. “I have to have what you have got, help me!”. When Baxter recoils in disgust, Johnson starts killing him in an admission that he cannot bear his role as police officer anymore. The self-hatred, which could be observed before in his interactions with his wife, is projected onto to Baxter.

The script is by John Hopkins; based on his stage play. Hopkins wrote several scripts for “Z-Cars”, among them one for a very young Ken Loach. The acting, particular Connery’s ‘lost soul’ Johnson, is brilliant. And Trevor Howard also excels in his portrait of the senior police detective. Gerry Fisher’s camera catches the mood of the early 70s in Britain perfectly and the grim architecture of the Secondary Modern school where the victim (Maxine Gordon) attends school, and creates a claustrophobic atmosphere in the police interview room. In 1971, before shooting Diamonds are forever, Connery had only agreed to star in this new James Bond film, if United Artists would finance two independent films of his choice, costing not more than 2 million. In the end, THE OFFENCE, which cost £ 900 000, was the only realised project – it was a box-office flop. Roman Polanski beat Connery to the post with the second project, a screen version of Shakespeare’s Macbeth. AS

AVAILABLE FROM 20 APRIL 2015 COURTESY OF MASTERS OF CINEMA | EUREKA