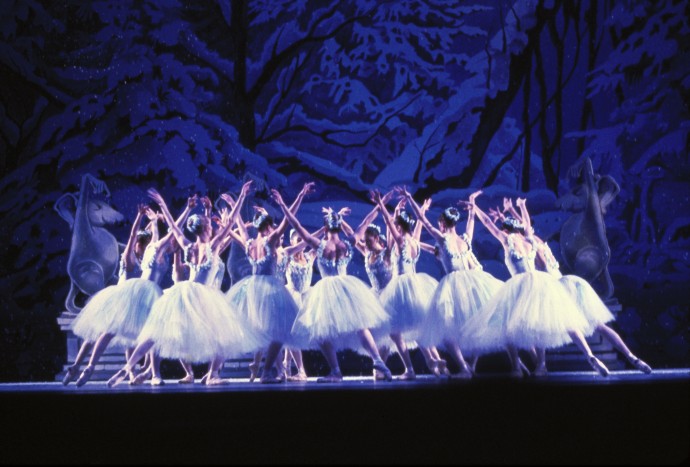 Carroll Ballard (The Black Stallion) has tried to give Tchaikovksy’s ballet based on ETA Hoffmann’s story, a more child friendly appeal. He has engaged the children’s book author Maurice Sendak (Where The Wild Things Are) to co-script and have a hand with the design.

The opening sequence shows an illustrator sketching sets and characters of the story. But that is as far it gets innovation-wise: the rest is a very respectable version, choreographed by Northern Ballet’s artistic director Kent Stowell. Somehow acting and dancing never manage to feek ‘live’, this is an saccharine-laced sugarplum: too sweet and too much culture with a capital C. And, in spite of aerial shots and some interesting tricks – like the dream dancers on the bed sheets with the girl’s face towering over them – one hardly forgets that this is a (very well) staged ballet.

Ballard’s successes as a director, particularly with Never Cry Wolf depended on great outdoors settings. They were lyrical epics about men in the wilderness. But he never breaks trough the demarcation lines of the stage: his trickery (like the fourth wall in some of the scenes) just underlines the fact, that he is showing a “Guckkasten” production. Strangely enough, one of the most impressive scenes is the fat tiger, having to function as a maypole for the dancing children – most certainly an idea of Maurice Sendhak.

THE NUTCRACKER is a prime example for the impossibility of filmed ballet: it is in a way a contradiction in itself, because ballet is somehow transitory – the dancers glide, their physical presence feel replaced by their image. Charles Maccerrass’ interpretation of Tchaikovsky is ponderous, giving it too much ‘schmaltz’ and failing on the tempi – after all, this is supposed to be a ghost story – for children – but nevertheless, the music never reflects the eeriness of the story.

Only when Sendak’s sinister figures appear do we finally see something out of the ordinary. But these moments are rare and they feel alien in the context of the whole, rather mediocre, enterprise. The dancing is somehow lost, whilst the dancers are obviously better dancers than actors, the camera concentrates most of the time on their secondary skills. Too often cuts interrupt the action, taking away the fluidity one associates with ballet; only near the end, during the Nutcracker Suite, we are treated too a long, uninterrupted dancing sequence. The result is still an admirable effort, perhaps the collaboration of Maurice Sendak set the bar of expectations too high.AS