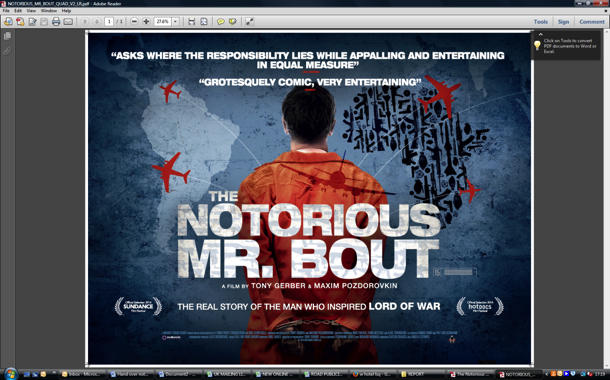 Tony Gerber’s documentary on Victor Bout suffers a little from too much footage of the man himself, and too little explanatory material. This way, Bout comes over too much as a one-off, and not as one of many perpetrators in a world-wide net of deadly dealingsBritish ex-minister Peter Hain called him ”Sanction Buster”, and for an UN-Official he was simply “The Merchant of Death”: Victor Bout, born in 1967 in the Tajik SSR, then part of the Soviet-Union, has been an arms dealer between 1993 and his arrest in 2008 in all the hot spots of recent wars: Angola, Liberia, Sierra Leone, DR of Congo, Afghanistan, Liberia, Kenya, Lebanon and Libya.

In most of these countries he had connections with the ruling classes, who (more often than not), were serial offenders against human rights. And like other psychopaths who felt that they themselves were the victims, he created the cult of his personality. In his case, this involved having friends and family members shoot an amazing amount of videos featuring” Uncle” Victor, a harmless, joy loving entrepreneur, making money for his family and friends. Much of the footage is not much different from holiday images of an ordinary family man. He is cultivating the image of the naïve salesman, transporting needed goods from one country to another – insisting, that he was not responsible for the cargo, consisting very often of weapons, apart from the more ordinary fair of produce or electronics. It is difficult to believe that a man who was a military translator in the USSR army, discharged in 1991 with the rank of Lieutenant Colonel, speaking six languages and having operated in the realm of Soviet military intelligence (the GRU) was really so blatantly unaware of his doings as he (and his wife Alla, who features extensively as his defender in this documentary) claims. Instead he was a not a particularly untypical product of Neo-Capitalism after the fall of USSR, where oligarchs took control not only of the economy but also of government. And compared with the real big-shots, he was only small fry during the formative years of globalisation– but a very dangerous one. It is true, that “making money” is never a clean business, but there are many shades. Bout, like all arms dealers, occupies the blackest spot in the hierarchy of commerce.

When he was arrested in Bangkok in November 2008, after a sting operation of the US government – Bout promised to procure military graded weapons for the guerrillas of the “Revolutionary Armed Forces of Columbia”, to be used against Americans – Bout became a political football between Russia and the USA, before he was extradited to the USA in 2010, were he was sentenced to 25 years in prison. It is true, that Bout is only one of many, and the main transgressors in the world wide arms dealings are still the governments, making a fat profit, whilst feeling superior to the Bout’s of this world. But this documentary might help to encourage reaction, in bringing at least one case to the public attention. AS. AS