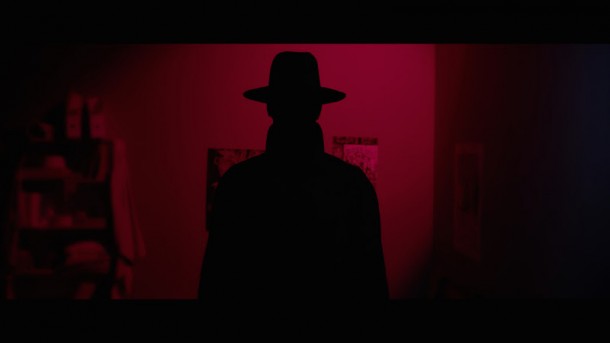 After ‘weirding us out’ with Room 237 and ABCs of Death 2, Rodney Asher turns his documentary camera to the phenomenon of ‘sleep paralysis’ with THE NIGHTMARE. A word of caution: those who are salivating for enlightenment on the condition will find this foray deeply unsatisfying; veering between mild tedium and rampant hilarity, it fails both to terrify or to inform. Instead Ascher trawls through the twilight backwaters of the US and Manchester (all look the same) to provide an unedifying array of interviews with weirdos who bore on endlessly about their experiences with the debilitating nocturnal state.

It emerges that sleep paralysis occurs between wakefulness and deep sleep. Drawing examples from worldwide literary sources indicating that the condition has ancient mythological origins, Ascher suggests incubi and black cats are to blame, along with a shadowy figure of ‘the hatman’: a black silhouetted figure menacing the transfixed slumberer, who is also plagued by neurological symptoms of tingling, strange visions and ringing in the ears.

Ascher occasionally appears in the frame as he conducts these endless interviews in semi-darkness, using techniques of the kind seen in CSI Investigation (images of neurones buzzing etc), while actors replicate the ghastly experiences in various bedroom scenes. Jerky camerawork, unorthodox framing and jump cuts provide a sensation of otherwordliness ramped up by the characters themselves who are actually more scary than their dream characters: they range from the plain odd to highly strung and stressed individuals from troubled backgrounds. Jonathan Snipes provides an ambient soundtrack of buzzing and crackling. Sufferers seeking help from the medical profession have largely been greeted with scepticism, and suggestions that the condition may be contagious also appear to be unfounded: I slept soundly after the screening.

So Ascher’s film is inconclusive in its attempts to explain the phenomenon and, for the most past, THE NIGHTMARE fails to provide any real chills once we have become acclimatised to the shadowman images, which are repeated, ad nauseam. There are laugh out loud moments to be had from the sheer weirdness of the characters involved who become increasingly unbalanced as the film unspools. A missed opportunity, then, to shed light on a clearly debilitating condition. It appears that sleep paralysis is largely ‘mind over matter’ but those of a nervous disposition should probably give THE NIGHTMARE a wide berth: no pun intended. MT