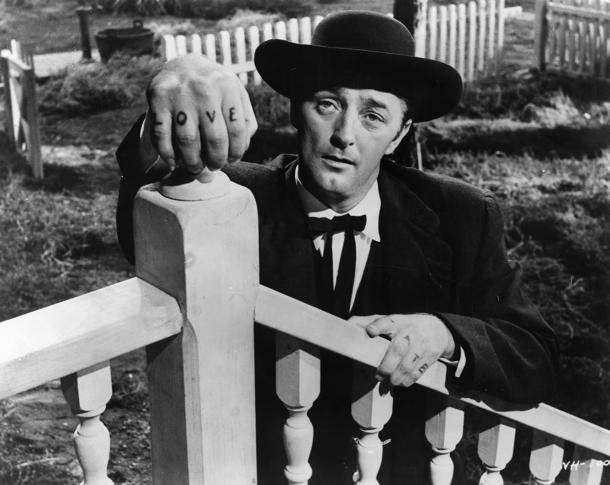 Back in the fifties, Charles Laughton’s reputation as a flamboyant actor on stage and screen totally eclipsed THE NIGHT OF THE HUNTER, his only outing as a director. This magical piece of ‘Southern Gothic’ was America’s answer to German Expressionism.  Dark themes of religious fervour, sexual tension and fear strike terror into the subconscious. Coalescing with dreamlike set pieces rendered exquisitely in black and white, this masterpiece of chiaroscuro lighting has the ability to shock and enthral. The image of Willa’s corpse in her white winceyette nightie, languishing underwater in the Bayou, is one of the creepiest  sequences in Gothic cinema. 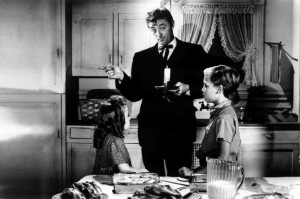 However, the film was not a commercial or critical success at the time.  James Agee, scripter of The African Queen, was the brains behind the screenplay, based on the novel by Davis Grubb. He offered up the idea to Laughton providing the Britsh thesp with a ideal framework on which to unleash his creative genius on the silver screen.

The setting is the Christian bedrock of West Virginia during the Depression years, a  time of hardship and male chauvinism in the Deep South where Shelley Winter’s ‘Willa’ is left widowed after her husband, Ben Harper, receives the ultimate punishment of execution, having  left the secret of the stolen loot with their two young children. Posing as a man of God, Robert Mitchum plays psychopath Harry Powell who prays upon such widows, marrying them and stealing their money, he tracks Willa down through the criminal network. She is persuaded by the local matron, Evelyn Varden, that in their God-fearing community a widow is more respectable if she re-marries, particularly to a respectable man of the cloth. So Willa marries Harry, who only really worships himself.  On their wedding night, he makes it clear that sex in not on the agenda and he has no desire for progeny and so Willa’s dreams are shattered and her sexual energies are subverted into religious fervour. Joining Harry on a mission to prosceletize through fire and brimstone sermons, the piece is chockfull of religious motifs and sensationalism with its well-crafted Gothic art and set direction, redolent of the Silent Era.

Shelley Winter plays a similar role to that of Alice Tripp in  A Place in the Sun (1951): a gullible, disillusioned romantic, down on her luck and disappointed with life. Cowering under the dominating figure of Icey Spoon (Evelyn Varden) she brings a subversive quality to the role of a young and vulnerable mother who eventually becomes a victim. 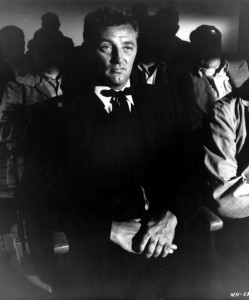 After the children evade Powell in a rowing-boat, the film takes on a fairytale feel as the fast-moving Mississippi carries them on a nightmarish journey through  starlit countryside: Stanley Cortez’s magical cinematography zooms in on all manner of local flora and fauna: a white owl swooping down on a baby rabbit is a metaphor for Powell threatening his step-children: “It’s a hard World for little ones”.

As Powell, Robert Mitchum gives one of his most innovative performances: menacing, cruel and demonic, as his black figure rides on horseback silhouetted against the sunset, whistling religious hymns.  Well-known for his langorous looks and lazy drawl in Noir classics such as Out of the Past (1947) and His Kind of Woman (1951), here he plays a more sinister role as a magnetic charmer who is a figure of fear to children but one of sexual allure to women, with his tattooed fingers and rakish respectability.  Purportedly, it was his favourite role in a film.

Lillian Gish gives an exultant turn as a winsome carer with attitude. Taking in the Harper children, she styles herself as a soft earth mother who is later to produce a rifle and to actually use it.  THE NIGHT OF THE HUNTER is one of the most mesmerisingly horrific arthouse films of all time.  Worthy of its re-mastering and ripe for a re-viewing. MT

THE NIGHT OF THE HUNTER completes GOTHIC: THE DARK HEART OF FILM series at the BFI, Southbank and selected cinemas nationwide from 17th January 2014