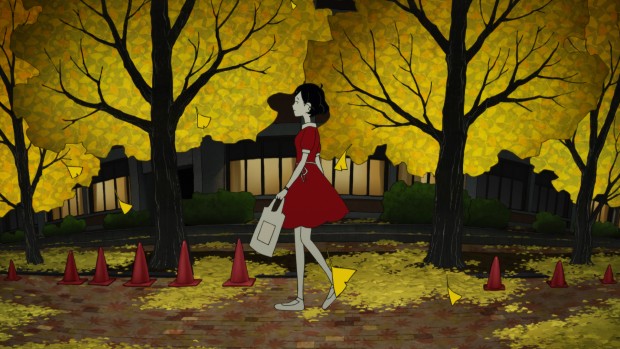 Masaaki Yuasa returns to the big screen with his first release in 13 years. Night is Short, Walk On Girl, based on the Manga by Tomohiko Morimi, is a variation on the One Night action Manga, itself the Oriental equivalent of Cornel Woolrich’s pulp novels featuring the doomed hero with just one night to prove his innocence and rescue his girl –while the clock ticks away. In this case, it’s the girl of the title, Ottome, meaning ‘girl with black hair’, who runs the show.

Set in Kyoto, Senpai (Hoshino), a shy senior college student from an upmarket background, is in love with teenager The Girl (Hanazawa) who keeps her feelings for him buttoned up. Senpai pursues her at every corner, but The Girl is much more streetwise than he is. After a mutual college friend’s wedding party, Senpai tries to find a seat near his paramour, but comes under attacked by a gang robbing him of his clothes, leaving Senpai deeply embarrassed and forced to beg strangers to lend him some underwear. The Girl, meanwhile, lucks out by winning a drinking contest with a God-like creature, Rihaku, thus liberating one of his debtors. As the night goes on, The Girl meets the ‘God of the old Books Market’ (Yoshino) along with Todo-son, an unhappy collector of erotic Japanese art, and a group of nihilists, who fall under her spell. A college theatre production turns into a out-out slapstick show, and, in the final section of this riotous night journey, The Girl fights tornados and icy hail, as the anime reaches its momentous finale

One word of warning: The title is completely misleading as The Girl never walks but rushes around madly, a tireless adventuress, seeking out excitement at every corner. Senpai is more contemplative and we learn a lot about the inner workings of his mind, where Ego and Id fight it out. There seems to be no ‘dramatic arc’ – this is a fairy tale told on speed. It would have been good to learn more about the innovative animation: for example, if people get drunk or act embarrassingly, their bodies are suffused by different shades of red, with Senpai being the main victim – but the subtitles don’t leave much time for admiration. The film’s characters are based on the drawings of the Manga by Yusuke Nakamura, and the director successfully marries this rather minimalist style with his overpoweringly fluid action scenes.

Some critics have accused Yuasa of celebrating Senpai as a stalker, but while he seems to be a bit of a control freak, he is very unsuccessful at it. Yuasa has stuck to the first sentence of the novel “This is not a story about me, it’s a story about her”. AS

OUT ON RELEASE FROM 3 OCTOBER IN CINEMAS NATIONWIDE