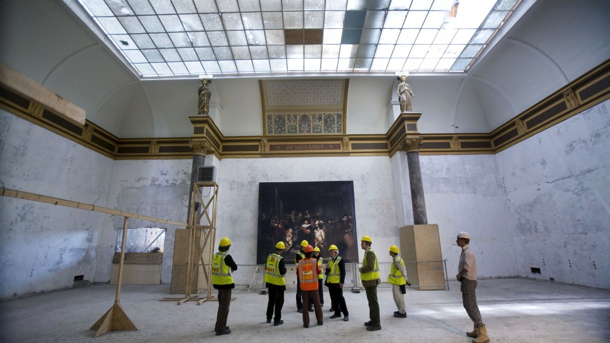 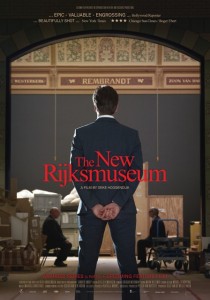 When the Rijksmuseum in Amsterdam was closed for renovation in 2003, the re-opening of the building was planned for 2008. Now, we all know that initial forecasts of these types are always on the optimistic side and appreciate the difficulties of getting rid of builders (and those snagging lists!) but few would have suspected that the Rijksmuseum, with all its Vermeers and Rembrandts, would stay closed for nearly a decade. Oeke Hoogendijk has chronicled this mammoth project with an equally detailed and elaborate film that reflects the subtle nuances of the magnificent spaces; originally, the whole running time of the two parts was nearly four hours: this version is a mere snippet of just over ninety minutes.

The original and very imposing Rijksmuseum was finished in 1885. Together with the Louvre, the Hermitage and the Prado it forms the quartet of the leading art temples worldwide. The new museum was planned by two Spanish architects, Antonio Cruz and Antonio Ortiz, who won the competition, because they solved the entrance problem: their design included an annexe and an underground entrance to the museum. But in 2005, when the project was still on time to be finished in 2008 as planned, Amsterdam’s very powerful bicyclist lobby took offence of the design. They argued that the cycle path through the old entrance, leading through the building and out at the back, was much smaller than the old one, and the equally curtailed pedestrian path would lead to an unsafe environment. The city council decided in favour of the bicyclist lobby, and the architects had to find a new solution. Whilst the curators of the museum went shopping around the world, for example to Japan, to acquire two statues of grim looking fighters, others have to make decisions, which of the old exhibition pieces have to go, since the space of the new museum is smaller than the old one.

Hoogendijk takes the side of the architects and museums staff against the political pressure group – hardly surprising when the spokesperson declares (very seriously) that cycle routes are more important than the right of the public to have the museum reopened, and at the same time constricting the spending. Ronald de Leeuw, world renown Director General of the Rijksmuseum, takes the consequences: he resign in 2008 and moves to Vienna.

His successor, Wim Pijbes, will have to fight for another five years before the re-opening. Unlike de Leeuw, he is a more dictatorial figure (perhaps understandable in the light of the on-goings) and he falls out with his designers. One of them, the Frenchman Jean-Michel Wilmotte, falls asleep in  a meeting, whilst Pijbes insists on the repainting of twenty rooms, since he dislikes the dark colours of the wall. In the end, to the surprise of everyone, the museum reopens, with a ceremony for the statutes of the Japanese fighters, to make them feel welcome in their new home, a belated triumph of art over political power groups and administrative conflict.

Hoogendijk’s style is close to Fred Wiseman, like him, she chooses the ‘fly on the wall’ approach (and the sumptuous running time of the original versions!), rarely taking sides, observing and chronicling a maddening process. Centre point is the slow demoralisation of the architects, who had to re-invent their concept many times over – no wonder, that they started to question the democratic process, which lead to situations, Kafka would have been proud of. An important film, questioning the decision making process of “progressive, democratic” institutions. AS

EXHIBITION ‘REMBRANDT: THE FINAL YEARS’ WILL RUN FROM FEBRUARY 2015 UNTIL MAY 2015.