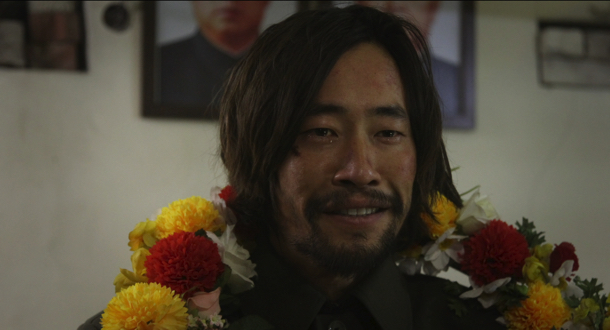 With moments of dark and lacerating humour and a really grim scene where a potential North Korean spy gurgles to his death by swallowing his own tongue, this is a social and political story that condemns both the Communist regime in the North and the South’s rampant Capitalism showing that, at the end of the day, both are morally and politically corrupt and unsatisfactory for completely different reasons – although the North Korean hero, an honest fisherman who thinks the grass is still greener in his homeland until the mournfully tragic denouement.

When his fishing boat breaks down in a slim stretch of water between North and South, sending it into the ‘no go’ zone, he is captured by the South Korean security forces and remanded for questioning. Although he answers openly and frankly, his assigned investigator is an embittered sadist who is desperate to convict him for spying against the South and subjects him to a series of harsh cross examinations reducing his morale to rock bottom despite his fierce attempts at self preservation claiming his toughness and physical strength is earned him the name ‘Iron Fist’ – during his National Service days. A sympathetic guard (who secretly fancies him) desperately tries to protect him in the face of the ambivalent Head of Security but things go from bad to worse when he finally tries to make it on his own when his guard loses him while taking him on a reccy in downtown Seoul – engineered to see if he really has nefarious intentions. ‘Iron Fist’ shows himself to be a good guy by first refusing to open his eyes to avoid the corrupting forces of the surrounding commercial district, and then beating off some venal pimps who are chasing a prostitute clad only in her baby dolls. This lands him back in custody where he is practically forced to defect to the South, on ‘humanitarian’ grounds after insisting on returning home. But his problems are far from over when he is eventually released back to join his wife and daughter in the North.

Kim Ki-duk tells his political satire in a straightforward linear style taking a disenchanted look at each regime, not really coming down on either side but but exposing the gross inhumanity and injustice of both parties. At the end it is the common man who suffer; the ordinary self-employed worker. Sound familiar? MT