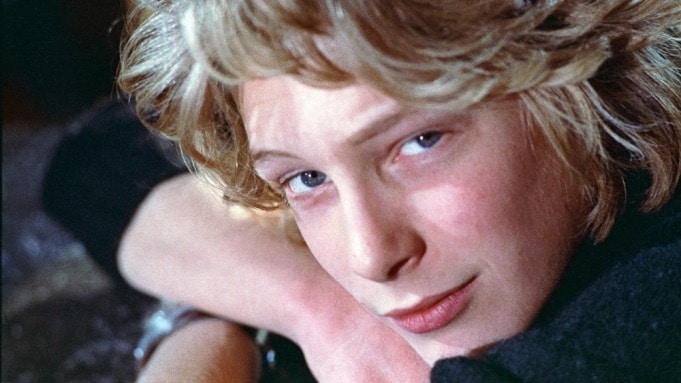 The remainder of the young man’s life resembles a Greek tragedy after a world-wide advertising campaign based on Andrésen’s androgynous image inspired, among others, Japanese Manga writers Ryoko Ikeda, sealing  his fate. But What’s crucial here is that Visconti ‘owned’ the image of the under-aged actor via a copyright agreement for three years.

Björn was the fifth of six actors Visconti tested in 1970 in Stockholm for role of Tadzio, the nemesis of gay composer Von Aschenbach, in the novel of the same name by Thomas Mann. Visconti intended to direct the movie for the big screen, having been obsessed by it for a long time. Paradoxically Visconti somehow got away with being a prominent member of the Italian Communist Party and a very wealthy aristocrat. He was openly gay (exceptional in Catholic Italy after WWII) and his film crew consisted mostly of members of the the same sexual orientation.
At the screening test, Visconti made Björn strip to his pants, making the teenager highly uneasy.

Visconti emerges a stern and authoritarian figure, issuing an edict: nobody could even so much as look at Björn. Meanwhile the director touted the teenager around at gay nightclubs during the film’s shoot in Venice, where – acceding to teenager “the waiters looked at me as if I was a particular rare food which they would devour at any time”.

Miriam Samboli was engaged by the production company to look after Björn as a governess, helping him with his homework, and Casting Agent Margareta Krantz. Word had it that Visconti was completely smitten by Björn:”Whenever he was with Björn, his whole body came alive.” The media circus gathered speed in 1971 after Death in Venice had its premiere in London with The Queen and Princess Anne in attendance. The festival in Cannes, a few few months later, made the young man into a worldwide star. He was particularly famous in Japan as the first ‘Western Idol’, and made some music records. Next came Paris, where a certain Mr. Durant paid Björn 500 francs a month as pocket money, and rented a flat for him. “I had never any of my own money during my travels round the world”.

But Björn still had his education to think about and at school the boys sneered at him for his ‘femininity’: “I only had to snap my fingers and ten girls would come running – I never learned the social skills to communicate with the other gender”.

Björn Andrésen amassed credits for 16 TV films and series (40 TV episodes), as well as eleven feature films. He had asked not to be cast in the “Tadzio” mould, because he wanted to escape the gay image. It goes without saying he never gained the same attention as he did in 1971.

But it would be wrong simply to blame the Visconti episode for Bjorn’s post 1971 career, there were clearly aspects in his childhood that contributed to his lack of ongoing success: Björn never knew his biological father and his mother Barbro, a writer and painter, committed suicide. We watch him in a heart-breaking scene with an archivist who shows him the police report of Barbro’s suicide. His sister Annike Andrésen, the siblings were born in the same year, and daughter Robine Roman, paint a picture of a haunted man who never came to terms with fame. But the worst was still to come: Björn’s son Elvin died, nine months old, of Sudden Infant Death Syndrome. He is convinced he died “because I loved him not enough, I was not up to it”.

The present sees him with supportive girlfriend Jessica Vennberg, who helps Björn clean his flat and fight off an eviction order from a Housing Association. A an adult he cuts a shy figure, hiding behind masses of hair: clearly not wanting to be seen.

DoP Erik Vallsten follows Björn Andrésen’s journey with a respectful distance: Here is a man so much hurt by the past  he is a whisper away from disaster, totally lacking agency or self determination. Lindstrom’s biopic echoes an uneasy silence, captured with empathy in this diligent and dignified portrait. AS