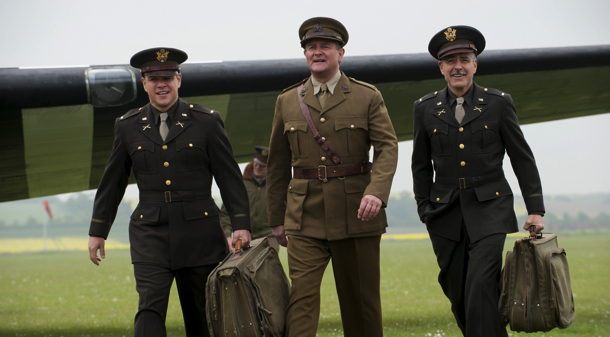 George Clooney has made a brave and enterprising bid to shine a light on one of the most important episodes of Art history – the looting of paintings and artworks by the Nazis during their retreat in the Second World War.  The resulting historical drama, in which he also stars as art historian Frank Stokes, (a fictionalised version of George Stout) along with a fine cast of Matt Damon, Jean Dujardin, Bill Murray, and High Bonneville, is rather too worthy for its own good. This is Clooney’s 5th big screen outing and sees him and his colleagues setting out to France in 1944 where they discover the Russians are also hot on the trail and intend to keep to uncovered treasure as spoils. Cate Blanchett is magnificent as a bluestocking curator under the Nazis, who at first is unwilling to cooperate but finally falls for Damon’s charms and gives access to the archives.  The search goes underground and there is much ranting and raving in rhetoric about the supreme value of Art, driving home the salient points with vehemence, as if Clooney underestimates the intelligence of his audience, although naturally he has the best orating.  Production values are slick and strong and Alexandre Desplat’s score is well-pitched and surprisingly moving, but ultimately this is a rather artless drama that sacrifices suspense for altruism.  Possibly a documentary would have been a better way to raise the profile of this injustice. MT,  120mins  US IN COMPETITION

THE MONUMENTS MEN IS ON GENERAL RELEASE FROM 14TH FEBRUARY 2014 NATIONWIDE.