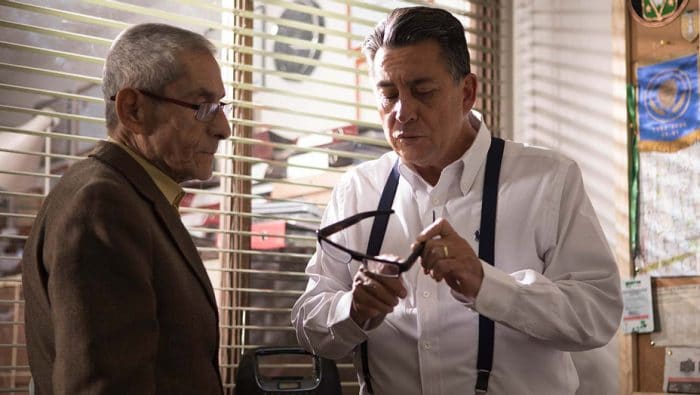 An 83 year old widower goes undercover in a Chilean nursing home in Maite Alberdi’s topical documentary that looks into neglect in the care system. But what he discovers is something quite different.

Rather like Distant Constellation  another recent doc set in a nursing home, the tone here is upbeat and tongue is cheek, primped by a rather suggestive score, but the message is real and very familiar. Alberdi’s quietly observed study gradually develops into a cumulatively moving and important statement about the infantilisation, abuse and loss of dignity suffered by the elderly in nursing homes.

Reports of care home abuse are well-documented all over Europe. But in Chile, the daughter of one resident decides to takes suspicions of her mother’s maltreatment and theft into her own hands hiring a private detective agency to look into the matter. Recently widowed Sergio, 83, gets the job to spend three months in the home as an undercover mole reporting back to the client, via his employer, the suavely dapper Romulo. Apart from mastering the new technology involved: using FaceTime and recording videos – the poor man is still grieving the recent loss of his own wife, and finds the romantic onslaught – even an offer of marriage – from several lonely widows quite difficult to deal with. Meanwhile he struggles with an investigation into ‘suspicious’ residents who are suffering memory loss, loneliness and abandonment by their own families. To make matters worse, his ‘target’ – the resident he has to monitor – is an unsociable woman who has no interest in talking to him at all.

Alberdi also has a difficult task on her hands and one that she manages with great sensitively, skill and imagination in a film that widens its concerns from the outset turning from an enquiry into an illuminating expose that asks more questions than originally intended. Clearly the question uppermost in our minds is the one Sergio has come to investigate. But it’s unlikely that anything untoward would happen in the presence of a film crew. Instead the film turns into a thoughtful observation of institutional life inside a close knit community. The majority of the residents are women who cling to their Christian faith and mourn the loss of their homes, their independence and their families, who rarely visit. Surrounded by people they don’t necessarily want to be with, all they have left are photos and memories.

Sergio is under pressure to report back to Romulo on the results of his snooping which is more or less inconclusive, and don’t reflect back well on Romulo’s client. What Sergio eventually tells him iwon’t come as a big surprise to anyone. MT