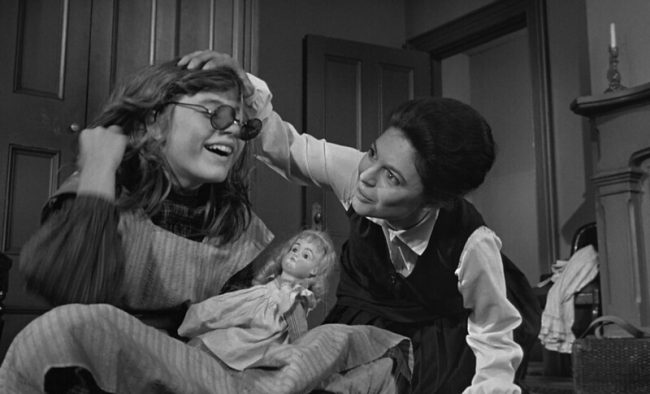 The Miracle Worker is a Southern Gothic melodrama about the remarkable life of Helen Keller (1880-198), who was born deaf and blind but went on to achieve great things in the world of literature and politics. Directed by Arthur Penn and based on William Gibson’s Broadway play, the film avoids sentimentality achieving a rare emotional power due to its raw and uninhibited performances from Patty Duke (Keller) and Anne Bancroft as her Irish governess Anne Sullivan whose patience and dedication helps her overcome her physical and emotional setbacks and live a full life. The Academy Award-winning story is set in 19th century Bible Belt Alabama where Helen is born into a middle class family who are frightened and devastated when they realise their newborn daughter is unable to see or hear. The real Helen Keller’s illness was attributed to meningitis – or possibly Scarlet Fever at the age of seven, but in Penn’s version Keller is afflicted from birth. Hope arrives in the shape of Anne Sullivan, a 20-year old specialist teacher from Boston whose empathy comes largely due to her own recently regained ability to see. Anne responds to Helen through the power of touch —the only tool they have in common—and leads her frightened pupil on a challenging journey from fear and isolation to enlightenment and self-determination. MT