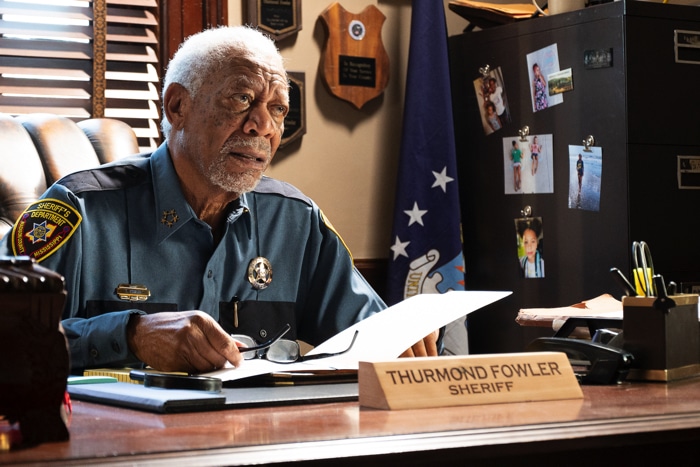 Why Morgan Freeman went for this clunky cliched ‘neo-noir’ whodunnit is anyone’s guess. The only other mystery is how such a poor script got a budget to be made in the first place. Set in deepest Mississippi it sees a group of honest but deeply uninteresting people emerge as suspects in a story so far-fetched and implausible even Freeman fails to gain credibility as the local sheriff investigating the case. It all starts with Russ (Hauser), a financially successful broker, enjoying drink in his local after trousering a fortune on the city’s stock markets. Tongues start to wag when he is confronted by an angry punter lamenting the loss of his life savings. It appears Russ has duped the locals in an ill-thought out insurance scam, and they are not best pleased at losing their money. Russ then gets a series of anonymous phone-calls announcing: “Where will you be the minute you wake up dead?” Do we really care? Russ’s next door neighbour Delaine (Alexander) does, and she temps him round to her place to enjoy ‘the best beef stew in the neighbourhood”, according to her daddy (Dahlgren) who survives the stew but then gets shot dead. This is the first in a series of murders, Morgan Freeman losing the will to live as gradually bodies and plot-holes pile up. MT

ON DIGITAL PLATFORMS from 9 JANUARY 2023.