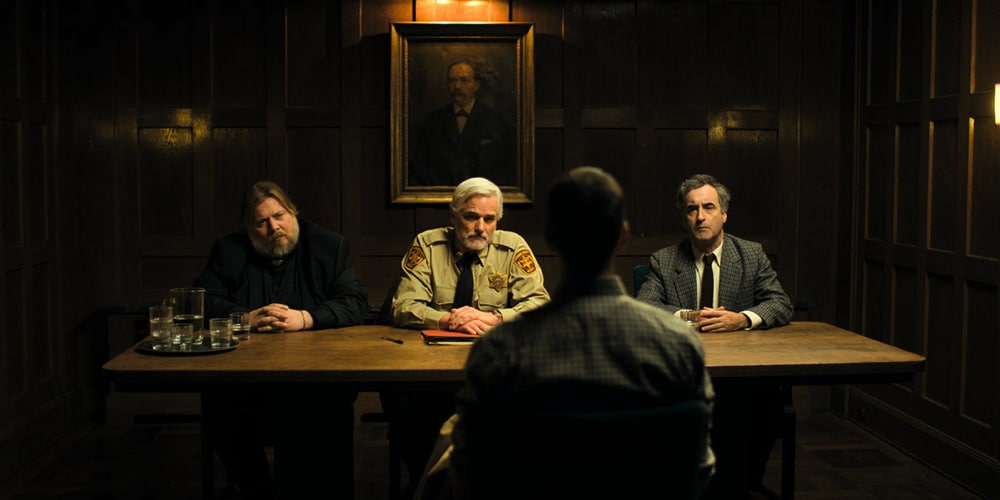 A middle man is a concept that many will be unfamiliar with but it provides the backbone to Ben Hamer’s dead-pan drama about small-town America, inspired by Lars Saabye Christensen’s novel Sluk. The strange thing about this absurd Hal Hartley style feature, directed by a Norwegian, is the cast of lowkey European and Canadian actors that only adds to its impassive charm.

Frank Farelli (Pål Sverre Hagen) is just the sort of person you might run into in this moribund backwater where days go by uneventfully for its small-minded inhabitants. Yet there’s a dark humour about a place that used to attract visitors by the score to a hotel that’s now been closed for many years, along with the local cinema.

The place in now run by a motley crew of po-faced citizens laughably called the “Commission”: a sheriff in the shape of Paul Gross’, a man of God (Nicolas Bro) and the local doctor (Don McKellar), supported by their able secretary (Tuva Novotny). They are the self-appointed Civic guardians who keep the civic wheels running smoothly despite a dwindling council budget. Strangely the taxpayers that still live here seem beset by a string of tragic events requiring the appointment of a ‘middleman’ – in this case Frank – to be the bearer of bad news, a job that requires him to take an oath of secrecy, seemingly ludicrous in a place where everyone is either related or ‘in the know.’

Mild-mannered to the point of obsequiousness, Frank ironically lost in father some time ago in one of these tragic episode and now lives with his mother, played by the attractive, long-suffering Nina Andresen who despairs at her son’s naivity. The lowkey narrative meanders on spiked by moments of of dry humour. One scene sees Frank ‘celebrating’ his new job as the town’s middleman, with half a tee-bone steak (he couldn’t afford the other half). But once installed in his new office office, Frank’s workload grinds to a halt, the previous spike of accidents levelling out to a virtually nothing, leaving the now sharp-suited middleman twiddling his thumbs with the bored Brenda. This all changes when catastrophe suddenly rears its head, and Frank is not only in the thick of it, but implicated in the crime that shakes up the feature’s weirdly ambiguous finale. MT