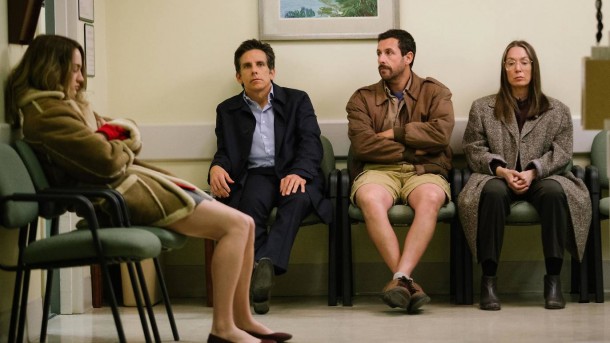 Baumbach’s latest serio-comedy THE MEYEROWITZ STORIES asks the question: how do you manage a creative father who constantly puts you down?

Ben Stiller and Adam Sandler deal with their own neuroses while managing a creative father who puts them all down. Stiller is well-off LA lawyer Matthew Meyerowitz, a half- brother to failed musician Danny (Sandler) and non-entity Jean (Elizabeth Marvel) who live close by to their sculptor father (Hoffman) whose party piece is bringing the conversation back to himself. Harold’s retrospective show brings the family back together in the Brooklyn home he shares with his fourth wife Maureen, a scatty alcoholic played amusingly by Emma Thompson. But the show is put in jeopardy when Dad suffers a brain trauma that makes his narcissism worse.
The siblings find a certain love-hate solidarity as they struggle with the inevitable fallout, all operating from a position of shame; Danny feels a failure as an artist, although he’s a good father. Matthew fails by not being an artist, despite being a financial success; Jean has emerged from Harold’s negligent parenting never achieving anything, in act of self-sabotage; and they’re all latently angry with each other. Baumbach’s clever script ensures there’s plenty of dry humour, and even open wrestling, to lighten things up. With entertaining turns from Dustin Hoffman and Emma Thompson and a soulful Adam Sandler as the underdog, this is a film that will feel poignantly personal for many.