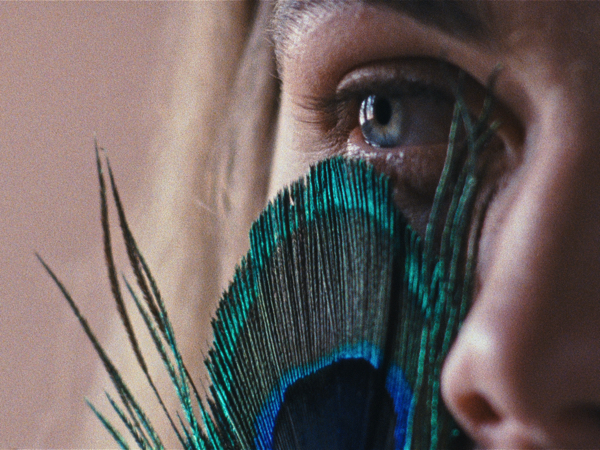 The first feature of Portuguese filmmaker Catarina Vasconcelos is a stylish and fadoesque meditation on memory, home and longing. We all have a family, however distant or dysfunctional, and this nostalgic memoire is an intensely feminine one flooded with fondness for her forebears. The film also serves as a history of Portugal itself seen from a female point of view, marking pivotal events in the nation’s history such as the death of Portuguese dictator Salazar, seen splashed on the front cover a women’s magazine.

The Metamorphosis of Birds opens in reverie mode transporting us back to the pre-war world of the filmmaker’s grandparents Beatriz and Henrique, who was a naval officer.  Back on dry land, the plant-loving Beatriz is grounded by pictures, photographs and objets that furnish the comfortable home she shares with their six children while her husband is away at sea.

The voiceover is provided by a series of female and male voices as the camera luxuriates over the lavish surrounding where we also meet the children. The oldest son Jacinto (her father Hyacinth) is seen climbing out of a cupboard at the start of the film. Meanwhile, couped up in his naval quarters on board ship, Henrique looks at the sea from his porthole window and communicates with Beatriz via romantic billets doux: “I miss putting my face through the curls in your hair”. But this romantic idyll ends abruptly when Beatriz suddenly dies. In common with her father, the filmmaker lost her own mother when she was only seventeen. So early maternal death is something she has in common with her father: “When my mother died, my father and I found each other in the absence of the word “mother”.

As the film moves on the images become less personal, nostalgic and lyrical, and more existential in the style of Dali or even Magritte. This reflects Vasconcelos’ own personal crisis that collides with Portugal’s economic slowdown sending her to find a new start in London. Soon afterwards she finds out her grandfather wanted to burn those love letters he shared with her grandmother Beatriz. And this film is a tribute to them both, and a reflection on changing times for women

Conversations with her family members attract more and more textural references to the narrative as it develops into a vibrant tapestry of Portugal itself and the people she grew up with: “about my father’s mother (Beatriz). My mother. Mothers’ mothers. Mothers’ mothers’ mothers”. This memoir also explores a moment in history she had not experienced: an era where women struggled to have a voice:. “This was a time we have a duty not to forget. It is a great privilege to be able to live in Freedom”.

The Metamorphosis of Birds distils the essence of Portugal through word associations, evocative locations and flora and fauna. A judiciously lowkey classical score heightens moments of emotion making this a vivacious and surprisingly moving memento of her family and homeland.  “The dead don’t know that they are dead. Death is a question for the living”. This sumptuous film is a home for  ghosts and their memories, but also the present that lives on and on. MT

A metamorfose dos pássaros (The Metamorphosis of Birds) by Catarina Vasconcelos