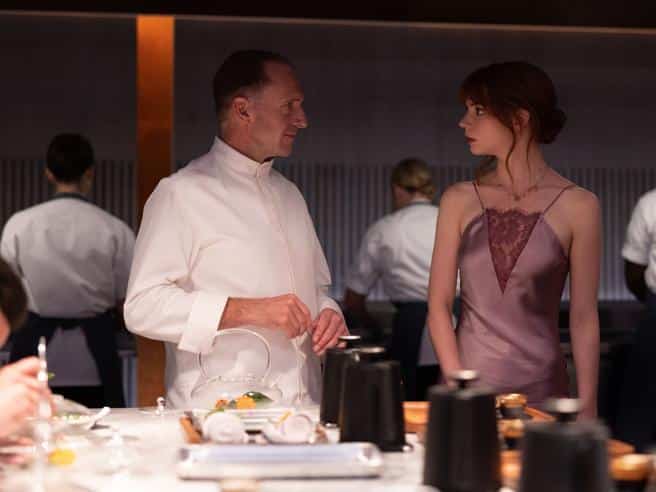 A puzzle lies at the heart of this deceptively simple satirical drama from Succession director Mark Mylod. And no prizes for guessing who eventually finds their way successfully through the trial that takes the form of a puffed-up haute cuisine soiree, a sort of ‘masterclass’ lead by Ralph Fiennes’s condescending chef and his prim assistant Elsa (Hong Chau).

The Menu is the latest in the recent spate of films that lampoon the rich and privileged. But also those who slavishly follow the crowd – here it’s a brace of bankers, a washed up wealthy couple; an actor beyond his sell by date. And at the end of the meal their lives will end in tragedy – no less – as the mood shifts into horror.

Then there’s Margot (Anya Taylor Joy) a last minute stand-in date for fearful foodie Tyler (Nicolas Hoult) who is in awe of the whole set-up. The Menu is clever, amusing and very proud of its smug credentials. But Margot will call it all out and foist Fiennes’s eminence grise masterchef by his starched, shroud-like overalls. As a footnote when it comes to over-inflated food descriptions, I first heard the phrase ‘freshly harvested baby carrots tossed in creamy butter’ back in the early 1980s, on a flight to San Francisco. Who would of have known that this ridiculous food gentrification fetish would get so out of hand. MT

THE MENU IS NOW ON RELEASE NATIONWIDE